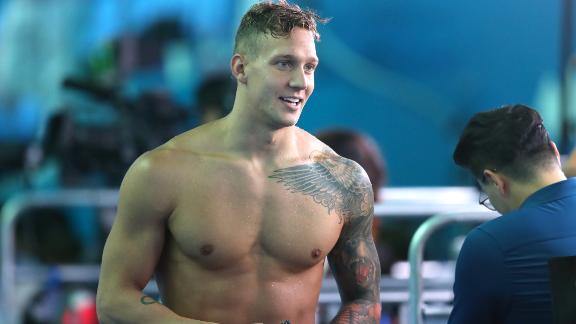 With two Olympic golds and 13 World Championship golds, American swimmer Caeleb Dressel is tipped to become the next Michael Phelps. He shows CNN how he trains in lockdown to stay in top shape.

Olympic champions are not so different to you and I.

Caeleb Dressel, the man often described as 'the new Michael Phelps,' has been faced with many of the same problems as the rest of us during lockdown. Namely, avoiding boredom and resisting junk food binges.

Tipped to win multiple golds at the Tokyo Games, which were initially scheduled for this summer before the coronavirus pandemic put the world on hold, Dressel is learning to adapt -- adjusting to life without regular visits to the swimming pool and trying to cope without physically seeing the family and friends he misses so much.

He has also had to put plans for world domination on hold, too.

The 23-year-old won seven golds at the 2017 World Championships and six in 2019 and has broken Phelps' 100 meter butterfly world record. This summer he may have matched Phelps' record of eight golds at a single Games, but the American is sanguine about his career being at a standstill.

"I certainly don't want a pity party or anything like that," Dressel told CNN Sport. "I still have my sponsors, so the worst thing happens to me is I don't get to swim in the Olympics for a year. You know, that's not the end of the world for me.

"People are getting sick or dying, so that's why I'm okay with [it]. I don't get to swim in a pool -- I'm fine with that getting pushed back because there are a lot of things that are bigger than swimming. This is life or death. So what I don't get to swim for a year. That's exactly what the mindset needs to be."

To combat the tedium of life in lockdown, the two-time Olympic gold medalist has joined in the online craze of performing trick shots while in quarantine, with the help of an assistant, his pet dog Jane.

"This was day four in the quarantine, so I'm still trying to figure it out," he explained. "I've seen a couple of trick shot videos going around, I'll try some of these out. I did some pretty cool ones, but ... the cup taped to her head -- yeah, that was the biggest one.

"That was actually the hardest one as well because she kept moving and stuff. It's been fun making videos, trying to interact. I just miss seeing people. I'm not like a social butterfly or anything, but I just miss seeing even my friends. I mean, everybody does. I miss seeing my parents.

"But social media has been helping a lot. My YouTube channel I've done more than I ever have on it. Instagram, going live and just trying to connect with people the most I can because if I'm feeling lonely, I feel like a lot of people are and it's just kind of looking for anything to feel connected with. So I'm trying to help out with that."

To compare Dressel's physique to that of a Greek God would perhaps be enough to make even Zeus himself blush.

However, with training time in the pool limited due to the lockdown -- he can now "only" swim four times a week and weight train -- the swimming star has become more conscious about his diet.

And that can be particularly challenging for somebody with a sweet tooth. Dressel has previously admitted his dream cheat meal would be to finish an entire family pack of Oreos and one of his housemates, Ben Kennedy, is renowned for baking brownies.

"He's so good at baking it's insane," Dressel said. "He's got a little apron and everything. He just bakes all the time.

"Sometimes, if he wants me to have a cookie, I'll have a cookie, but just to be able to compliment him and let him know that his cooking was good. But right now, more than ever, I want to try to hone-in on cleaning up my diet.

"It's not like I was eating like trash earlier, but it's easier now that I'm not fitting in 10 practices a week. When I got out of the water in my old routine, I'm just looking for any food in sight to just stuff in my body -- just very, very hungry. So right now, it's a lot easier to kind of go through and pick out the right meals ahead of time."

Dressel is fortunate to live within a five minute walk from the home of his strength and conditioning coach, Matt DeLancey, and have access to his garage gym.

It might not quite match the training facilities he's used to, but Dressel -- with his philosophical outlook on life -- is choosing to focus on the small wins.

"I get to work out shirtless," he said. "I hate wearing shirts. I mean, most of the time I'm just in a Speedo, so I get to lift without a shirt on now. So there are actually some better things with lifting when you think about it."

Despite his Olympic plans being derailed by this unprecedented situation, Dressel is determined to make the most of the challenges put it in front of him.

On the swimming front, his coach has tapered his training plan to avoid burnout with almost 18 months still go to until the rescheduled games, while out of the pool he's dedicating some of his extra time to reading more.

He also has a wedding to plan, although he admitted much of the organization is being expertly handled by fiancee, Meghan Haila, who Dressel proposed to at the end of last year.

"Am I going to let this absolutely just ruin all the momentum I had or am I going to carry that over to 2021?" he said. "I plan on carrying it over and just staying hungry, still finding ways to challenge myself, still waking up early, I don't want to sleep in.

"I want to have everything in place where I come out of this better and ahead of where I was before this happened. It's not good, it's not bad, it's just different and what are you going to do during this time to turn into something better? I mean, that applies to everybody.

"Whatever lies in front, we'll get used to it and we'll adapt and figure out a plan."