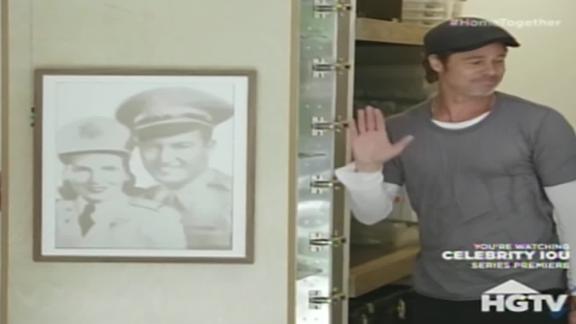 HGTV's new show "Celebrity IOU" centers around celebrities giving back to the "unsung heroes" of their lives. The show debuted with Brad Pitt giving back to a makeup artist he has known for over thirty years.

Thankfully, Brad Pitt was here for Season 1, Episode 1 of "Celebrity IOU" on HGTV.

The Oscar winner grew teary-eyed in the Property Brothers latest show, surprising his longtime friend and makeup artist of 30 years by renovating her detached garage into a stunning guest suite, complete with a bathroom and makeup studio.

"I love the sound of a construction site. If I'm not building, I'm dying. Just walk into a place and just see the possibilities," Pitt said on Monday's episode, adding, "It was such a s*** box, this is amazing. It's fantastic. I've been waiting so long to see something happen to this dump."

Black was "flabbergasted" by the renovation, saying, "It's really very moving and I just so appreciate it."

"I know Brad's generosity, it's huge," she said. "But for him to do this, it's really more than I ever thought could happen. I am so touched by this, I could really not thank you enough. I love you, Brad."

By the end of the renovation, Pitt had also made friends with the entire crew.

"He wanted everybody to feel like he was spending some time getting to know them," Jonathan Scott told People. "At the very end he remembered every single person's name on the production crew and on the construction crew. He remembered everybody and wanted to make sure that they knew how grateful he was for what was happening. He was a true gentleman in every sense of the word."

Other stars who will be featured giving the gift of a home makeover this season include Michael Bublé, Rebel Wilson, Jeremy Renner, Viola Davis and Melissa McCarthy.