DeSantis risked the lives of Floridians 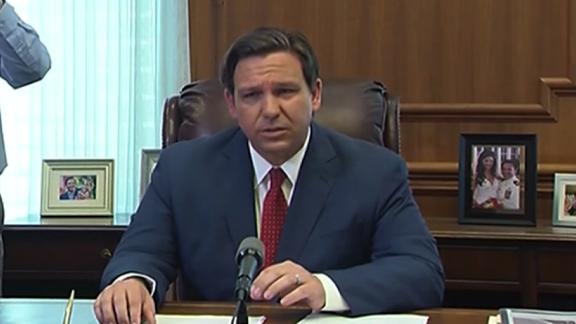 Florida Gov. Ron DeSantis issued a stay-at-home order for the state, limiting movements and personal interactions outside the home to only those necessary to provide essential services or conduct essential activities. CNN's Rosa Flores reports.

A handful of governors deserve top marks for moving swiftly and efficiently to implement social distancing, issue stay-at-home orders and prepare to do battle against the coronavirus. Govs. Jay Inslee of Washington, Andrew Cuomo of New York, Mike DeWine of Ohio and Gavin Newsom of California are among them: they were early, effective and well-organized.

Florida Gov. Ron DeSantis, by contrast, has been late and lackadaisical, in ways that will undoubtedly cost many Floridians their health -- and, perhaps, their lives.

Despite surging numbers of fatalities in New York and Washington and a rising tide of Florida editorial boards demanding action, DeSantis did not issue a statewide stay-at-home order until April 1. That made Florida the last state with more than 5,000 coronavirus cases to implement a statewide shutdown.

"Unlike some other governors, DeSantis ignored the obvious for too long, and Floridians likely are sicker for it," the Miami Herald said in a scathing editorial. "His statewide essential-services-only order, though welcome, is indeed, too late."

On March 22, the same editorial board has issued another action under the pointed headline: "Coronavirus is killing us in Florida, Gov. DeSantis. Act like you give a damn."

DeSantis drew widespread condemnation for resisting calls to close Florida's beaches to throngs of students partying for Spring Break. The governor finally relented, but not before thousands of kids gathered -- and then fanned out to homes and college campuses all over the nation, which likely helped spread the virus far and wide.

As far back as March 18, the Orlando Sun-Sentinel editorial board noted: "When governors in other states are more aggressive, it makes you wonder: What do they know that we don't? Why are they more aggressive than we are, when Florida has more cases than they do?"

The answer appears to be political: DeSantis is a close ally of President Donald Trump, who recently changed his official residence from New York to Florida. And until now, it seems DeSantis was following along with Trump's strategy of trying to minimize the danger and prevalence of the virus.

As the Palm Beach Post editorial board put it: "There's no denying it: DeSantis, like some -- but not other, more-conscientious -- Republican governors, is taking his marching orders from President Trump, who is still downplaying the intensity of COVID-19′s grip on the nation, ignoring medical experts and playing politics with Americans' very lives."

That's not an exaggeration. Florida is tied with Maine as the state with the largest share of population (21%) that is 65 years or older. The millions of seniors in the state -- many in retirement communities and nursing homes -- are especially vulnerable to coronavirus. DeSantis' long-delayed decision to issue a stay-home order put them at greater risk.

He has company in the slow-to-act governor's club.

Gov. Bill Lee of Tennessee is resisting calls from the state's medical professional societies to issue a mandatory stay-at-home order. Mississippi's Tate Reeves sparked confusion by issuing an executive order that overruled efforts by local counties and cities to implement their own stay-at-home rules (Reeves finally relented and issued a statewide ban on gatherings of 10 or more).

In Arizona, Gov. Doug Ducey's director of emergency management resigned, citing "lack of communication and transparency" as the state geared up to implement stay-at-home orders. And Texas Gov. Greg Abbott wasted valuable time by not ramping up testing and insisting that local cities, not the state, should lead the response to the virus.

President Trump and other leaders liken the fight against coronavirus to a war. If so, DeSantis and other field commanders should be demoted or court-martialed for dawdling as the invisible enemy gathered strength and began wreaking havoc in our homeland.

Weather Blog: Drought condition have eased some for Indiana and Ohio