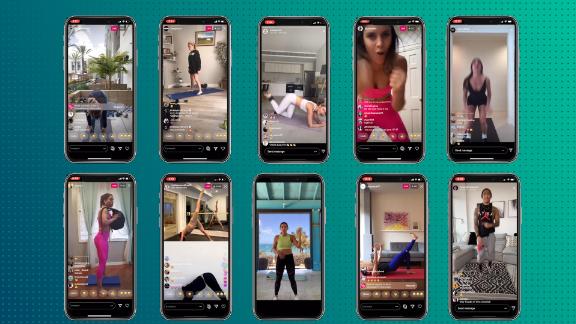 As the coronavirus continues to spread, fitness studios around the country are shutting their doors and adjusting to a new reality. The sudden shift has inspired creativity and flexibility for gyms and studios, which are largely dependent on physical locations and on-site staff.

The changes have rocked the fitness industry, which was worth $94 billion in 2018, according to The International Health, Racquet & Sportsclub Association.

Some studios -- such as Modo Yoga, which has locations in the United States, Canada, Australia and France -- are offering free classes on Instagram Live. Other studios, including SoulCycle, closed all of its locations globally, hoping to reopen when conditions improve and the curve flattens. The cult-favorite cycling studio doesn't have any online classes, but bikes are available for pre-order with a price tag of $2,500, and the company will release on-demand virtual classes later this year.

And as gyms and boutique fitness studios continue to close, fitness instructors are getting creative and amping up their side hustles.

"I've still been training clients that live in my building, though we've been using Lysol and in some cases latex gloves to be safe," Julie Verhage, a group fitness instructor at Equinox, said. Verhage also said that startups are reaching out to her and asking her to lead virtual workouts "so they can still have team bonding while everyone is working remotely."

ClassPass, a subscription service that partners with local boutique fitness classes, launched live workouts: More than 500 studios have added live, bookable classes to the platform, and 100% of livestream proceeds go directly to the studios.

The company is also encouraging users to donate directly to their favorite studios through the ClassPass app, and the company is matching $1 million in donations.

A library of more than 2,000 pre-recorded audio and video workouts are also available for free -- without subscription -- on the ClassPass website.

"The COVID-19 global pandemic has presented a challenge unlike any other that the health and wellness industry has seen," ClassPass CEO Fritz Lanman said in a statement. "Almost 90% of our 30,000 gym, studio and wellness partners across 30 countries have indefinitely closed their physical locations."

Jessica Goldman opened Dance Forever Studio in Chicago in 2005, but she recently closed her studio amid coronavirus concerns.

The disruption is pervasive

Small studios are getting hit hard. In the hopes of reopening after closure, yoga studios like Sacred -- with locations in Brooklyn in Manhattan -- are charging $10 for virtual classes on Zoom. But some of the small studios probably won't recover, according to Nathan Forster, CEO of NEOU, an on-demand fitness video platform. "I hope many of them can make it back, but there will definitely be some that don't," he told CNN Business in an email.

Even big companies like Flywheel are trying to figure out how to navigate the financial hit to its business. On March 20, in a plea for money, the company sent an email to members, encouraging them to unfreeze their membership and continue paying a monthly fee even though the brick-and-mortar locations were closing. In March, the cycling company shut down the virtual classes that are connected to its in-home bikes, and Peloton is letting Flywheel customers swap out their bikes for a used Peloton bike for free.

Many studios are creating YouTube video workouts in an effort to keep their clientele entertained and active. Cult-favorite HIIT studio Orange Theory, for instance, is sharing a free 30-minute workout on its website every day.

It's not a smooth road for the studios that aren't accustomed to being primarily digital. Boston rowing studio The Row House offers a variety of free live-streamed classes on Facebook, but you can only participate in the classes if you have a rowing machine at home.

To bridge the gap, the company is offering members 60 days of free access to on-demand content for other fitness studios that share the same parent brand, Xponential Fitness, including Pilates, barre and yoga classes.

Meanwhile, virtual and digital fitness companies are benefiting from the industry shift. MIRROR, an interactive at-home fitness system that sells for $1,495 and looks like a full-length mirror, has seen an increase in sales.

"Sales have more than doubled since the advent of Covid-19," MIRROR CEO Brynn Jinnett Putnam told CNN Business in an email. She added that MIRROR's team has been "working around the clock to launch our digital product earlier than originally planned."

But it's not all uphill for primarily online fitness brands. MIRROR and Peloton both have brick-and-mortar studios. MIRROR closed its three showrooms -- one in New York City, one in Los Angeles, and one in Stanford California -- and Peloton closed its New York and London studios to the public, but the company will "continue to produce live content without an audience," according to a statement from Peloton's co-founder and CEO John Foley.

For online-only fitness services like Obé, business is booming. The service gives members unlimited access to 14 live classes a day and 4,000+ on-demand classes. It costs $27 per month or $199 per year.

"We have seen a considerable increase in membership across the US in the last few weeks," he told CNN Business in an email. With an increasing number of parents and kids staying home, Obé released content for kids in partnership with KidzBop.