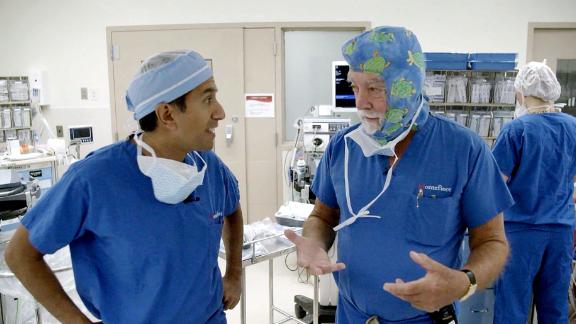 CNN's Dr. Sanjay Gupta looks back on the life of his friend and colleague Dr. James Goodrich, the renowned neurosurgeon best known for separating conjoined twins.

Most will remember Dr. James T. Goodrich as a recognized giant of neurosurgery, the most experienced neurosurgeon in the world when it came to the delicate and daunting separation of craniopagus twins, those conjoined at the head. These separations, which involve months of planning and dozens of procedures, are among the most challenging in any field of medicine. I know, because I was with him for 27 hours as he operated on Jadon and Anias McDonald and allowed CNN to document the remarkable event. Even as a neurosurgeon myself, I had never seen anything like it.

Our shared world of neurosurgery is a small one. There are just 4,600 neurosurgeons in the United States and as a result, we all cross paths at one point or another. I first met Dr. Goodrich when I was a resident, and even back then he had a Santa Claus-like beard and a constant twinkle in his eye. He had a sly grin and always looked like he knew the punchline of the joke before everyone else did. Along the way, we became close. He was a voracious reader, and could speak effortlessly about any topic I had on my mind. Given his stature as a preeminent pediatric brain surgeon, I loved watching people react when he told them he had dropped out of college at one point and became a surfer dude, as he described it. For most of us, he really was the most interesting man in the world.

That's why it knocked the wind out of me when I heard he had died early Monday morning. I knew the novel coronavirus and the disease it causes, Covid-19, would lead to too many cruel and unfair deaths, but I just didn't expect it so soon. I knew this virus would not discriminate based on who you are or what you do, and yet I still could not believe it would rob the life of someone who had saved so many. While I, like many others, had hoped to never know somebody who became ill or died from Covid-19, that changed with Goodrich's death. Today, I am grieving along with our entire neurosurgery community and the countless children and families he touched.

Over the day, I heard from so many of his colleagues who described him as "a beacon," "the heart and soul of our department," and a "humble and truly caring man." They spoke of his tremendous gifts as neurosurgeon, but even more of his spirit. It was the way he approached life, both professionally and personally, that was at once humbling and inspiring. He was a man who performed remarkably complex operations on little babies' brains, but also took time to bake cookies during the holidays and hand-deliver them to nurses.

I asked him once how he even ventured to begin performing craniopagus separations -- and surprisingly, his answer wasn't one of pride or confidence.

"If I had really done my homework and looked at the literature on craniopagus twins done at the time, I would have never accepted them. Because the literature was devastating," he told me.

Craniofacial surgeon Dr. Oren Tepper met Goodrich about a decade ago. Tepper told me that Goodrich was the very reason he came to work at Montefiore Medical Center in New York. They became surgical partners, and worked together on the 27-hour separation of the McDonald twins. And in operations like the McDonalds' and countless others, Tepper said he knows Goodrich also never forgot the parents of the kids he was treating.

"He was the steady hand in the operating room and always the voice of stability," Tepper said.

The hospital released a statement on Monday in which they called Goodrich a pioneer in the field of helping children with complex neurological conditions, having developed a multi-stage approach for separating craniopagus twins, like Jadon and Anias McDonald, who were fused at the brain and skull.

But to parents like Nicole McDonald, Jadon and Anias' mom, Goodrich was a superhero.

"It's not every day that you get to know a hero, a true hero. But I am so blessed to say that not only did I get to see Dr. Goodrich with his cape on doing the most brilliant complex surgeries that anybody could do, but I got to know him with his cape off," she said. "I would go down to lunch in Montefiore's cafeteria, and the lunch ladies would say, 'Oh, we love him. He knows all of our names.' That man was basically royalty. And yet he walked in the room and you felt equal. He listened to every word I ever said."

Goodrich once told me that he was too busy with his work to ever have kids of his own. He said he had committed himself to taking care of the world's kids instead, especially the ones who needed him most. He added that "after a while, those special patients become kind of like your own kids." That's just how close he became with families, how intertwined their lives were. He would still get Christmas cards from families 30 years after they first met. He was not just their doctor, he was a part of their lives forever.

When Goodrich operated on Jadon and Anias McDonald, he was pushing 70, but had an incredible energy that fueled him to operate nonstop through the day and night. He inspired everyone around him, and after spending time with him I resolved to never again complain of fatigue in my own life.

This week, we lost the famed doctor, with his tufts of gray hair and beard, who was known for incredible skill with his hands, but also incredible empathy with his heart. We lost the doctor known for keeping in close touch with those patients he operated on, always remembering children's birthdays and special milestones, ones he helped make possible. We lost the wanderlust brain surgeon who traveled the world consulting and operating wherever and whenever he was called. We lost the fighter who tackled what most had thought impossible.

"He fought with the ferocity from my family in a way that I will never ever forget. That I will forever appreciate. There will never be another James Goodrich. Not even close. He will never be matched, let alone replaced in the world," McDonald remembers.

Dr. Goodrich spent more than 30 years at Montefiore Einstein and was the director of the Division of Pediatric Neurosurgery at Montefiore and a professor of clinical neurological surgery, pediatrics, plastic and reconstructive surgery at Albert Einstein College of Medicine.

He is survived by his wife, Judy, and three sisters.

Dr. Goodrich was an incredible human being, and the world is a little less bright today without him.

While we knew the losses would come, they are no less painful when they do.

Hi: 48° Lo: 31°
Feels Like: 31°
More Weather
After a cold start to the workweek, temperatures are expected to warm above average for the beginning of December.