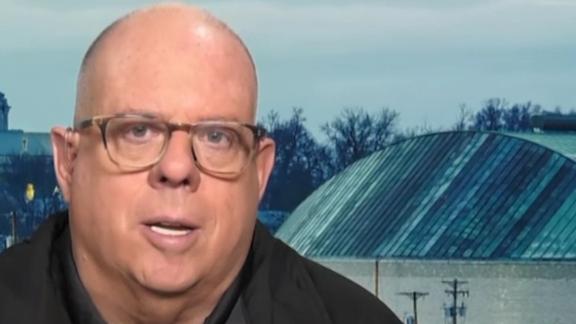 Maryland Gov. Larry Hogan said that some messages from the Trump administration have been contradictory to the suggestions made by health experts on stopping the spread of the coronavirus. Gov. Hogan's policies have been more aggressive at trying to limit nonessential activities within the state.

Never thought I'd say this, but thank God for Andrew Cuomo.

In the midst of a pandemic, Americans need real leadership -- and the New York governor has risen to the occasion. In the face of a feckless, reckless president spreading disinformation by the day, Cuomo has stepped up, using his platform to share accurate public health information and demand action.

It makes him, disturbingly, an outlier. And it reveals how the growing right-wing cult of Trumpism is endangering all Americans.

With some notable, clear-eyed exceptions -- such as Maryland Gov. Larry Hogan and Ohio Gov. Mike DeWine -- too many high-profile Republican governors and other leaders in states that are most affected are still dragging their feet or even actively putting people at risk. Florida Gov. Ron Ron DeSantis' was reluctant to enforce "social distancing," for example, and Jerry Falwell Jr., Trump's conservative Christian ally, invited up to 5,000 students back to campus at Liberty University in Virginia, where he is president, and also told faculty members to show up.

Dan Patrick, the lieutenant governor of Texas, told Fox News viewers that plenty of American grandparents would be willing to die to save the economy for the next generation.

"I just think there are lots of grandparents out there in this country like me...that what we care about and what we love more than anything are those children," he said.

There's now a creeping, creepy push for Americans to go back to work, despite a deadly virus that is not yet under control. The argument is a dark one: It's worth sacrificing 1 to 2% of the population -- mostly the elderly and immunocompromised -- to avoid plunging the nation into a depression (never mind that wiping out a million or more people and overwhelming our health care infrastructure would probably kill the economy anyway).

The party that claims to be "pro-life" and is using this outbreak to roll back abortion rights (Texas Republican Gov. Gregg Abbot, for example is using the crisis to bar "any type of abortion that is not medically necessary to preserve the life or health of the mother," said the state's attorney general Ken Paxton) is also telling us that it's worth sacrificing the lives of our elderly and vulnerable to save money..

It's fascinating and telling: The GOP thinks it's A-OK to tell women we have to give up our bodily autonomy, our financial health and even our physical safety in the name of preserving "life," but God forbid they have to take a financial hit to keep people alive in a pandemic.

The financial costs of coronavirus are real, they are painful, and they will get worse before they get better. Our leaders are right to be concerned about the economy. It's true that poverty and starvation may be downstream effects of an economic depression -- coronavirus isn't the only deadly possibility here, even if it's the biggest immediate threat.

But in one of the wealthiest nations on the planet, people don't have to die because they're poor, even during a serious financial crisis. In America, people do die because they're poor, but that's because of policy choices we make. Yes, a depression will be crushing to the poor and vulnerable if we stay on our current financial path of incredible inequality and decide that all of our lives actually matter.

Cuomo offered the right response. "We are not willing to sacrifice 1-2% of New Yorkers," he said in one tweet. "My mother is not expendable," he wrote in another. "Your mother is not expendable. We will not put a dollar figure on human life. We can have a public health strategy that is consistent with an economic one. No one should be talking about social darwinism for the sake of the stock market."

He's also been a leader in pressing the federal government to do something.

He's right, and he's one of the few voices of reason in this whole mess. But there's only so much power any governor has. To truly combat this thing, we need the White House to step up. We need the leader of our nation to intelligently -- and morally -- lead.

And so far, that's not happening.

Kids Who Care: Anthis Academy culinary students serve community with 'Give Back Thanksgiving'

Northeast Indiana unemployment improves, but not everyone is returning to work

The Rescue Mission provides 'Blessings to Go' meals for Thanksgiving

Upgrade the World Inc. prepares to deliver meals on Thanksgiving