Texas made Biden the Comeback Cowboy 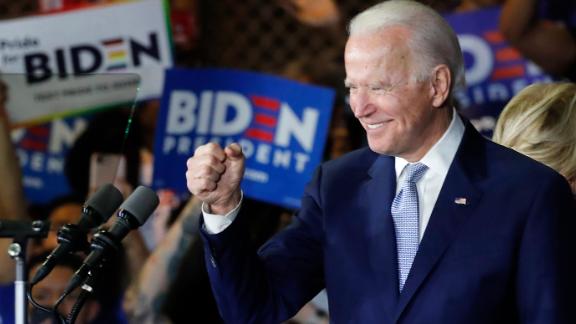 The biggest story on Super Tuesday was Joe Biden's stunning performance in Texas -- CNN is projecting that he will win the state. Call him the Comeback Cowboy.

At the Alamo, a handful of courageous Texans held out for 13 days against a Mexican army, which outnumbered them overwhelmingly -- and they did so against all odds. Every one of them gave their lives. But in giving their lives, William Travis and his tiny band of heroes set up Sam Houston for ultimate victory against Santa Ana at San Jacinto.

Beto O'Rourke, Amy Klobuchar and Pete Buttigieg sacrificed their ambition -- and royally teed-off the Bernie bros -- to endorse Biden in Dallas. In so doing, they set him on a path to victory. To be sure, there is a long way to go, and Bernie Sanders is a formidable force. But Biden's victory in Texas, powered by the stunning endorsement of O'Rourke, Klobuchar and Buttigieg, points the way to a strategy to win the nomination in July and defeat Donald Trump in November.

Sanders made a tactical mistake in dismissing Biden's last-minute Dallas endorsements as the last gasp of a failing Washington establishment. Biden was endorsed by rising stars like freshman Rep. Colin Allred -- who was a civil rights lawyer a few months ago and an NFL linebacker a few years before that. Biden was endorsed by young leaders like State Representatives Rafael Anchia, John Turner and Victoria Neave.

Sanders' response was to attack "the establishment" for rallying around his opponent. But it is laughable for a guy who has held public office for almost 40 years to call someone like Neaves, the daughter of a guy with a sixth-grade education, the "establishment."

The Democratic Party has looked closely at Sanders' revolution, and many are not buying it. Even with Mike Bloomberg spending hundreds of millions dollars on ads -- in stark contrast to Biden's paltry advertising budget -- Democrats in Texas, Virginia, North Carolina, Alabama, Oklahoma, Tennessee, Arkansas and elsewhere -- are delivering a clear and resounding message: they want Biden's empathy, his message of healing and of unity.

The Democrats voted for reconciliation, not revolution.

Hi: 42° Lo: 38°
Feels Like: 37°
More Weather
A strong cold front will bring rain and accumulating snow to the Midwest Tuesday along with frigid temperatures overnight.