The significance of Mayor Pete 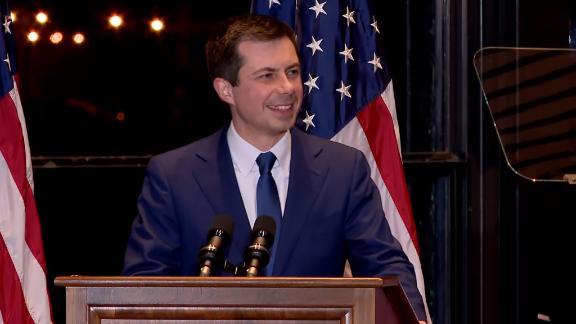 South Bend, Indiana, got its former mayor back and America lost its first LGBTQ presidential candidate on Sunday when Pete Buttigieg dropped out of the 2020 race.

The move surprised some because of both Buttigieg's strong showing in Iowa and New Hampshire and the outsized media focus he's enjoyed over the past year as the country got to know the first out gay candidate vying for the highest office in American history. Pundits noted that his bid fell victim to dwindling campaign funds. It's possible that the 38-year old ex-mayor from a city in a flyover state never expected to go this far on the national stage. Many LGBTQ Americans, including myself, were surprised as well, precisely because he is gay.

The news that the first gay man was running for president came as a great shock and delight. Many of us certainly didn't expect America would be ready to seriously consider a man who kisses his husband on the lips on national television. We were even more surprised to see Buttigieg gain momentum, rivaling career politicians like Joe Biden and Bernie Sanders in states like Iowa. But there he was, "Mayor Pete," winning over hearts and minds with his accessible intellect, his charming etiquette, his colorful Millennial-friendly marketing materials.

Buttigieg leaving the race for the highest seat in the land is markedly a defeat, but it's simultaneously a huge victory. His success to date shifts the benchmark for what LGBTQ representation in politics means, raising the bar for what's possible moving forward. He is also the most visible example in a recent and significant uptick in openly LGBTQ officials getting elected to local offices throughout the country.

Some LGBTQ Americans have condemned Buttigieg for "not being gay enough" -- citing his clean-cut, three-piece suit look and professed Christianity, and his G-rated public affection for his husband. But the very fact of Buttigieg's rise in the political scene has still been tremendous. While it's unfortunate that America has not (yet) allowed an LGBTQ person of color the pedestal or platform Buttigieg has, that in no way makes him a white-washed version of gay.

Buttigieg is authentically, unapologetically, and poetically a proud gay man who is not afraid to stand up in front of the entire United States of America and say that is who he is.

That visibility matters. It's easy to assume that LGBTQ people are doing just fine because marriage equality is the law of the land and we're seeing more inclusive characters in media than ever before. The reality is that four in 10 LGBTQ young people say they live in a community that is not accepting, according to the Human Rights Campaign.

More than two-thirds say they hear negative messages about LGBTQ people from elected officials. Advocacy groups report that there are more than 200 bills that, potentially, could adversely affect LGBTQ people proposed in localities across America. LGBTQ people are still too often banned from civic life, even in New York City in 2020, as with the Staten Island St. Patrick's Day parade. As a community, we are still starving for LGBTQ representation and visibility at all levels, particularly at the federal level in government.

The truth is, America has had the great pleasure and privilege of being represented by gay and lesbian leaders throughout all of its history. The distinction is that none of them were out, because they couldn't be.

For decades, coming out meant sacrificing your career, particularly if you were thinking about running for President of the United States.

Buttigieg presented a stripe of bold authenticity to the world this past year as a gay man and military veteran who wasn't always out, but who now wears his true identity as an honorable badge alongside many other facets of who he is and what he stands for. This is a critical leap for all diverse Americans who have not seen ourselves reflected on national debate stages or in the White House -- and in recent times, find increased hostility toward who we are in the institutions of power that represent us.

One of the most notable signposts of progress is that people took Buttigieg seriously. Not just coastal liberal elites (many of whom were the most likely to reject him for his conformity to mainstream, heteronormative politicking and to a history of issues around racial minorities), but Americans in the heartland. Buttigieg took the conversation beyond sexual identity and to the actual issues at stake for most Americans -- how we were going to build a more secure future for the nation's children.

More importantly, America listened. His unique qualifiers -- that he is both a salt-of-the-earth Midwesterner and an Ivy Leaguer; a pragmatic military veteran and an intellectual who speaks half a dozen languages; a straight-laced, doe-eyed white man who just happens to have a husband on his arm and not a wife -- made his ascendency that much more significant. Or perhaps that convergence of personal identities is precisely what carried him to this point. Regardless, the fact that America said, "he's gay and that's OK," is a gargantuan advance.

Some say Buttigieg tailored his campaign around Obama's in 2008, positioning his gayness in the way Obama did his blackness, as an opportunity to make history. Much as Obama left his legacy as the first black president in America; and Al Smith, the former New York governor and presidential hopeful left his as the first Catholic, non-Protestant, candidate from a major party, Buttigieg is paving the way for more out and proud LGBTQ people to seek higher office in years to come.

The value of an LGBTQ candidate beaming into millions of living rooms across America is paramount. Young LGBTQ people coming of age can see themselves reflected in Buttigieg, or at least see their own potential as someone who can be both a sexual minority and still valued at the highest levels. Other candidates sharing the stage with an LGBTQ peer are forced to contend with someone they might have normally dismissed. Homophobes are forced to double take that their narrow-mindedness may be in the minority. An LGBTQ candidate has increased agency to shift the conversation for everyone towards greater inclusion.

As far as what's next for this bright, gay civic leader, it's anybody's guess.

Elizabeth Bennion, a political science professor at Indiana University South Bend, told the South Bend Tribune, "I imagine there will be some discussion about a potential vice president post, a cabinet post, some other position in a new administration. A lot will depend on what his relationship with the potential candidates looks like in the months ahead."

Buttigieg may yet create more historic firsts. After all, America has not yet welcomed an out gay vice president.

First snow of the season comes to Fort Wayne