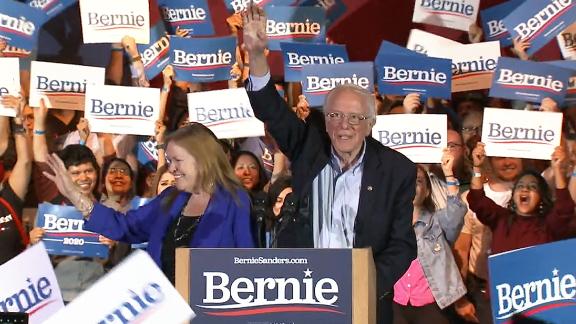 Democratic presidential candidate Sen. Bernie Sanders declares victory in the Nevada caucuses, telling his supporters in San Antonio, Texas, that he's feeling confident about his chances there, too.

Tom Steyer haunts my daughter's dreams. Saturday morning my 10-year-old daughter walked into my bedroom to report her dream that Steyer had come to Reno, like a billionaire bogeyman, creating panic and chaos on caucus day.

I guess this is what millions of dollars in campaign spending gets you. Steyer leaves Nevada as a distant runner-up and unviable. But he bought so much advertising here, he rented space in my child's brain.

As a Nevadan I speak for my state when I say thank God it's over. We can relax now. Iowa's agonizing debacle didn't repeat itself hear. Contrary to the expected chaos, our caucuses were orderly, well attended and a positive experience -- at least in my precinct, and I have not read or heard reports of anything else from across the state.

The Nevada Democratic Party's decision to have early caucus voting made the day itself much less chaotic than previous years, with shorter lines, great organization, and, if early numbers hold, a dramatic upturn in participation.

As a bonus, from my point of view, my neighborhood went unashamedly progressive, with two-thirds of all votes going to either Sanders or Warren. The result was, in fact, a three-way delegate tie between Sanders, Warren and Biden, and the trio placed in that order in the raw totals with only a few votes separating each candidate.

Most people came ready to vote, but in my own caucus precinct, there were still undecided voters, including me. I agonized between Warren or Sanders, both of whom I view as the best people to take on the most important issue in our country: Our President is a corrupt liar, whose policies promote hatred -- racial and otherwise.

In my precinct, I volunteered to be the secretary and count votes for the precinct captain. The iPad software worked perfectly, adding the early vote to the in-person count, clear and easy to follow. At each step, the captain asked if everyone agreed, before moving on.

I worked hard to shake hands and tell my friends and neighbors how much I appreciated them showing up, no matter who they supported. There were a few tense moments, when people didn't understand the process or why a candidate was not "viable," like Pete Buttigieg and Steyer in my precinct.

I felt it was my duty as a citizen to be loving and kind to the people who live in my neighborhood. There were a few angry people when Buttigieg and Steyer didn't make the cut, but everyone seemed to take it well and moved seamlessly to their second picks.

Every conversation about candidates revolved around the catastrophic nightmare currently in residence in DC. People didn't use his name. They called him "the orange one" or other, more colorful expressions. There were as many opinions on how to beat Trump as there were humans here, but the emphasis was on being authentic to ourselves.

Retired Clark County School District teacher, Brad Truax, caucusing for Buttigieg, summed it up for me. I asked him about all the armchair political punditry going on, and he insisted that people vote their conscience. "You should go with who you think will make the best president," he said.

The strategy of having an early caucus paid off for Nevada. It looks like early voting drove up turnout. It did in my precinct, which went from around a little over 60 votes four years ago to just under 90 It doesn't sound like a lot, but replicated across the state, the numbers matter.

I came to the caucus favoring Sanders but open to Warren. I thought a consensus candidate might be possible for us, but after watching the enormous numbers in my caucus, I stuck with Sanders, while my wife went for Warren. Sanders ended up winning the statewide caucus. At this writing, Warren, Biden and Buttigieg were vying for the second-place spot.

There had been real excitement for Warren in Nevada after her devastating takedown of Mike Bloomberg at Wednesday's debate. Warren has also had impressive surrogates come through Reno. On Thursday, I talked to Congresswoman Debra Haaland of New Mexico who made a strong pitch for Warren. "Dream big, fight hard, and stand up for working families and women," she said.

I think we are such a strong representation of America as a whole. We should always be one of the states that lead off the voting, but such a big responsibility comes with frayed nerves, lost sleep and fear of failure. And if you're not careful, Tom Steyer will haunt your dreams.