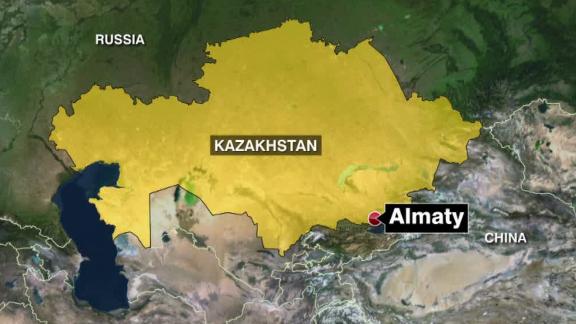 A plane carrying 95 passengers and five crew members crashed shortly after takeoff near the city of Almaty in Kazakhstan.

At least 12 people have died after a plane carrying 95 passengers and five crew members crashed shortly after takeoff near the city of Almaty in Kazakhstan on Friday morning.

The plane "lost altitude after takeoff and broke through a concrete fence," before colliding with a two-story building at approximately 7:22 a.m., local time, according to Almaty aviation authorities.

Flight Z2100, operated by Kazakhstan-based Bek Air, was scheduled to fly from Almaty, the country's largest city, to the capital Nur-Sultan.

Kazakh state media, citing the Internal Affairs Ministry, said at least 12 people had been killed in the crash, and nine people, including six children, had been injured.

Data provided by Flightradar24 indicated the flight crashed 19 seconds after takeoff, approximately 5 kilometers (3.1 miles) from the airport. Videos and images of the crash site show the damaged plane broken into several parts, with the nose embedded in a small partially-collapsed house.

Airport authorities said emergency responders were now working to evacuate passengers and crew members from the wreckage. There were no reports of a fire following the crash.

The cause and circumstances of the crash would be placed under investigation, airport authorities said.

Flightradar24 reported that the aircraft was a Fokker 100, a medium sized twin-turbofan jet favored for short haul flights.

In a statement published online, Kazakh President Kassym-Jomart Tokayev expressed condolences to the families of the victims and warned that those responsible for the crash would face "severe punishment in accordance with the law."

Hi: 54° Lo: 46°
Feels Like: 52°
More Weather
Rain showers continue Saturday evening, as will a few thunderstorms. Overnight, rain will taper off a little as temperatures drop into the mid 40s. On Sunday, rain chances return in late morning and last much of the day. Temperatures max out in the mid 50s and winds will be brisk at times.