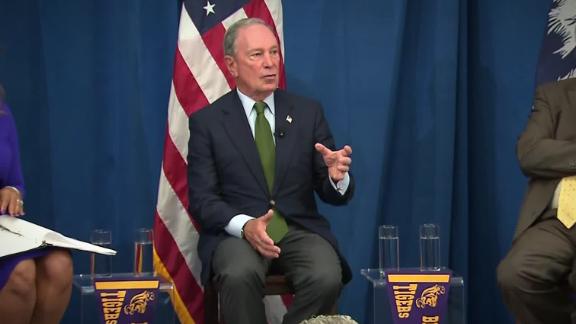 Former New York Mayor Michael Bloomberg will not file for the Democratic presidential primary in New Hampshire, a senior Bloomberg adviser confirmed to CNN on Thursday, following a plan to skip contests in early states should he decide to officially launch a 2020 bid.

Bloomberg's decision to skip the state's contest is not a major surprise as his spokesman Howard Wolfson had previously said if Bloomberg decided to launch a 2020 bid he would not run in the first four contests: Iowa, New Hampshire, Nevada and South Carolina.

Up until now, however, Bloomberg officials would not definitively say he would not file the paperwork in the Granite State. CBS first reported the former mayor's decision to not file in New Hampshire.

Should the billionaire decide to run, he would focus on states that vote on March 3, also known as Super Tuesday, according to Wolfson, who said "we are confident we can win in states voting on Super Tuesday and beyond, where we will start on an even footing."

"But the late timing of our entry means that many candidates already have a big head start in the four early states, where they've spent months and months campaigning and spending money," he said. "We have enormous respect for the Democratic primary process and many friends in those states, but our plan is to run a broad-based, national campaign."

It's a strategy that has never been successful in Democratic politics and party officials in both Iowa and New Hampshire, two states that prize their first in the nation statuses, have publicly expressed disappointment with Bloomberg's decision.

Bloomberg, who traveled to Arkansas on Tuesday to file for that state's primary, is not expected to travel to any other states this week, Wolfson told CNN. Last week, Bloomberg's team filed the necessary paperwork to get on the Democratic primary ballot in Alabama.