Jane Fonda on Donald Trump: 'I don't hate him. I feel sad for him' 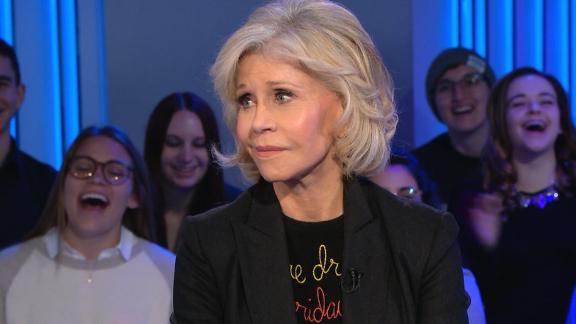 Actress Jane Fonda explains her initial plan to get President Donald Trump to act on the climate crisis to CNN's Van Jones.

Actress and activist Jane Fonda said she thinks President Donald Trump's actions on climate change are "criminal" and that now is the time for "bold ideas."

Fonda has been arrested multiple times in the last two months at the US Capitol during her protests to raise awareness about the climate crisis, which she calls "Fire Drill Fridays." Trump addressed her arrests in a November 6 campaign rally in Louisiana, telling the crowd: "Nothing changes. ... She always has the handcuffs on her."

Fonda said when Trump became President, she wanted to get "a lot of very beautiful women who are very, very smart about climate" -- citing Pamela Anderson as an example -- to make the case of climate changes' urgency to Trump.

She said she spoke with Trump's senior advisers and daughter and son-in-law, Ivanka Trump and Jared Kushner, but did not hear back from them again.

"He's a petroleum president... they are so in bed with the fossil fuel industry that there's nothing that even Pamela Anderson could get out of Donald Trump," Fonda told Van Jones during the interview, which is set to air Saturday at 7 p.m. ET on CNN.

Fonda also told Jones that a female candidate in the Democratic field can beat Trump in 2020, despite the outcome in the 2016 election.

"I do not agree with (former President Barack) Obama that this is not a time for bold ideas," she said, referring to Obama's warning to Democratic presidential hopefuls against going so far on certain policies that they become out of step with voters.

Voters, Obama said earlier this month, are "less revolutionary than ... interested in improvement" and that candidates shouldn't be "diluted into thinking that the resistance to certain approaches to things is simply because voters haven't heard a bold enough proposal." Obama said at the time that his comments were not meant to be a "criticism to the activist wing" because those people should be pushing the party, but added that the "candidates' job, whoever that ends up being, is to get elected" and warned them from thinking that "if you get so far out and you think automatically people will follow" because you are being "bold and creative."

"I think this is exactly the time that people need to be brave and offer bold ideas. ... Hillary Clinton didn't have an answer for the people that are so hurting in the middle of the country," Fonda said. "Donald Trump, you know, whatever we think of him, he had bold ideas."

"...I was all over the middle of the country before the election, and there was no noise from Hillary," Fonda added. "So that was a big mistake."