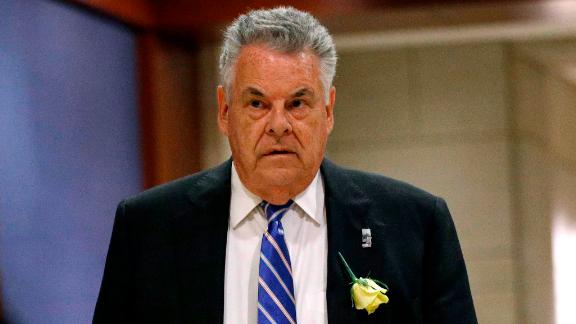 Longtime GOP Rep. Peter King announces he will not seek another term in office, becoming the latest in a growing list of Republicans who are not seeking reelection in 2020.

Longtime GOP Rep. Peter King announced on Monday he will not seek another term in office, becoming the latest in a growing list of Republicans who are not seeking reelection in 2020.

King, a former chairman of the House Homeland Security Committee, is perhaps best known for his outspoken calls for strict anti-terrorism measures. He's represented part of Long Island in Congress since 1993 and said Monday he plans to finish out his current term.

King, 75, said he was retiring so he can live full-time in New York and spend more time with his family.

"This was not an easy decision. But there is a season for everything and Rosemary and I decided that, especially since we are both in good health, it is time to have the flexibility to spend more time with our children and grandchildren," he said, adding that his "daughter's recent move to North Carolina certainly accelerated my thinking."

A source familiar with King's thinking told CNN on Monday that King "was really holding on" until his daughter, Erin King Sweeney, a former councilwoman in Hempstead, New York, "could run for his seat and win it."

"Pete is really wonderfully into his kids and grandkids, and hated the idea of seeing them even less if he had to split his time between" DC, New York and North Carolina, the source said.

King's retirement comes as his party inches closer to an election in which they could lose a number of vulnerable seats in the House, including his own. Earlier this year, the Democratic Congressional Campaign Committee said in a strategy memo that the New Yorker is "at the top of the retirement watch list" and included his district on a list of "targeted districts."

Republicans have struggled in suburban districts during President Donald Trump's time in office, a trend recently on display last week in Virginia, where Democrats seized control of the state legislature.

So far, 16 House Republicans and five Democrats have announced they won't seek reelection next year.

King, who twice served as chairman of the House Homeland Security Committee, held controversial hearings in 2011 about what he called the radicalization of Muslims in the US. The hearings, which he said at the time were "absolutely essential," ignited protests and anger against him, and accusations of bigotry.

King, who is of Irish decent, has also been outspoken about Ireland and voiced support for the Irish Republican Army in the 1980s. In 2011, the congressman defended his support, telling CNN, "I knew what was happening in Northern Ireland, and with the IRA. The IRA was a legitimate force, they'd been there for 40 years, 60 years, any way you want to look at it."