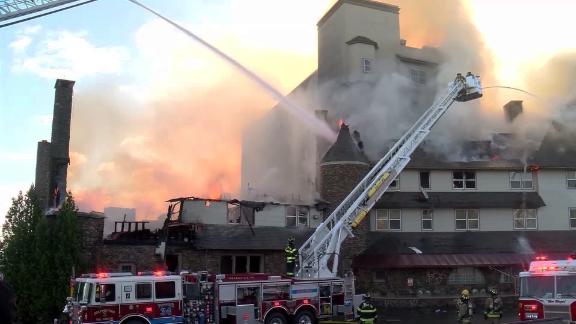 A Pennsylvania resort listed on the National Registry of Historic Places is destroyed by a fire. CNN affiliate WBRE has the story at Pocono Manor Resort and Spa.

Firefighters battled a blaze for a second day Saturday at historic Pocono Manor Resort and Spa in the Pocono Mountains in Pennsylvania.

The Pocono Township Fire Department got a call about 7 a.m. Friday morning about a fire at a building there, the department said on Facebook. Almost two dozen fire departments from nearby counties pitched in to help throughout the day at the sprawling century-old resort, according to CNN affiliate WBRE.

The fire was out for the most part by Saturday morning, but crews were looking for possible hot spots, CNN affiliate WFMZ reported, citing fire officials.

About 20 people were in the building when the fire started, and all made it out, WBRE reported. Responding to a post on Facebook that someone had been trapped, 12 County (PA) Fire Wire/News Page replied "all accounted for and removed."

Opened in 1902, the resort covers five square miles and is listed on the National Registry of Historic Places in its mountainous location about 100 miles north of Philadelphia, according to the resort's website.

Many past visitors mourned the damage on social media.

"I am heartbroken," wrote Jenny Fisher on the resort's Facebook page. "A piece of history is gone."

First responders and resort employees said the fire started in the kitchen, according to WBRE.

Strong winds helped the fire to spread, the affiliate reported.

"I thought we had it under control real quickly," General Manager Don Snyder told CNN affiliate WOLF-TV. "But the wind was gusting so badly, that it just really got ahead of the equipment that was on hand and kept blowing and blowing."

In a video posted on the Pocono Township Fire Department's Facebook, a woman said firefighters had only a few nights sleep before going back out in near-freezing temperatures Saturday morning.

Hi: 65° Lo: 35°
Feels Like: 42°
More Weather
High pressure will pave the way to another mostly sunny and pleasant day.

Motorcyclist critically injured in crash at Bluffton and Winchester roads

City, officer respond to Brake lawsuit: deny he was peacefully protesting, lost eye because of own actions

Supply chain interrupted: Here's everything you can't get now

Did the eggs hatch? An update on the new Fort Wayne falcon at I&M