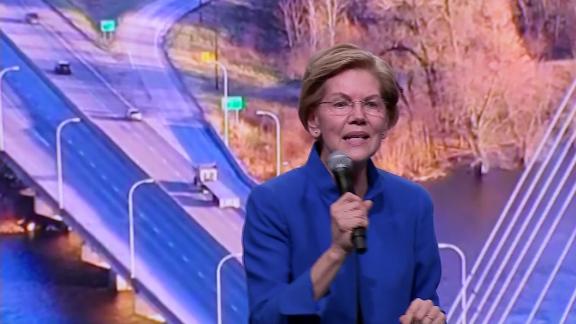 Ninety-four days from the Iowa caucuses, the Democratic presidential contenders each got 12 minutes to try to impress likely voters on the state party's biggest night of the year at the Iowa Democratic Party's Liberty and Justice Celebration.

In an arena in Iowa on Friday night, 13 Democratic presidential candidates were making their best cases to win the nomination to face President Donald Trump.

At the same time, in front of a crowd in northeast Mississippi, Trump was mocking the Democratic Party as "completely insane" -- and mocking several of its candidates.

He called former Vice President Joe Biden "very slow sleepy Joe." He said he doesn't know who Hawaii Rep. Tulsi Gabbard is. And he said former Texas Rep. Beto O'Rourke, who dropped out of the race Friday, "quit like a dog."

The split-screen moment underscored the different worlds in which America's two political parties exist: One where Democrats are battling to take the mantle from Barack Obama and Hillary Clinton, and one where Trump is still mocking "crooked Hillary Clinton" and twice used the middle name of his predecessor, calling him "Barack Hussein Obama" -- a detail before used to push birther conspiracy theories about the former president.

In Iowa, Democrats were gathered for the state party's Liberty and Justice Celebration -- a marquee pre-caucus event that drew more than 13,000 attendees. And the candidates each took their turns trying to show Democrats they were the best prepared to take on Trump.

Biden said he would beat the President "like a drum" and that Trump "knows it" because he has spent "a lot of money to make sure I'm not" the nominee.

"You give hate a little oxygen and it comes out from under the rocks," Biden said. "Well, he's breathed oxygen into hate."

South Bend, Indiana, Mayor Pete Buttigieg labeled Trump a "divider in chief," arguing he is offering a White House "you can look at in the news and feel your blood pressure go down a little bit than up through the roof."

Billionaire investor Tom Steyer told the crowd, "Everybody you hear here today is more honest, more coherent and more patriotic than the criminal who resides at the White House."

The event brought a circus-like atmosphere to downtown Des Moines. Massachusetts Sen. Elizabeth Warren arrived with a giant blow-up golden retriever, a nod to her dog Bailey. Harris danced into the Wells Fargo Arena. Campaigns brought giant banners to unfurl from the upper decks, lights and -- in one supporter of Minnesota Sen. Amy Klobuchar's case -- what Klobuchar joked sounded like a Viking horn that might "piss off Packer fans."

In Mississippi, Trump brought a raucous atmosphere himself.

Speaking for nearly 90 minutes, he told the crowd that all he knows about Hood is that "he fought very hard to elect crooked Hillary Clinton and Barack Hussein Obama. That's not the kind of guy we need here."

He complained about the House's impeachment proceedings, saying Democrats were trying to delegitimize his 2016 victory, and spent much of the night airing grievances against Democrats.

He made a number of false claims, including attacking Virginia Gov. Ralph Northam, falsely saying he "executed a baby after birth." He blasted the city of San Francisco, complaining about its homelessness and saying that House Speaker Nancy Pelosi should "go home and fix your district."

He launched into a lengthy criticism of the media, saying he hadn't received enough credit for US troops having killed ISIS leader Abu Bakr al-Baghdadi in a raid last weekend.

"That story disappeared so fast, gone. And that's OK. I didn't do it for the story. I did it because it was the right thing to do," Trump said. But, he added, "If I was a Democrat, they'd be talking about it for weeks."

Trump's comments came the day after the House voted nearly along party lines to set ground rules for impeachment proceedings against Trump.

On Friday night, he cast the impeachment investigation as an attack on his Republican supporters.

"The Democrats voted to potentially nullify the votes of 63 million Americans, disgracing themselves and bringing shame upon the House of Representatives," Trump said. "Make no mistake, they are coming after the Republican Party and me because I'm fighting for you."