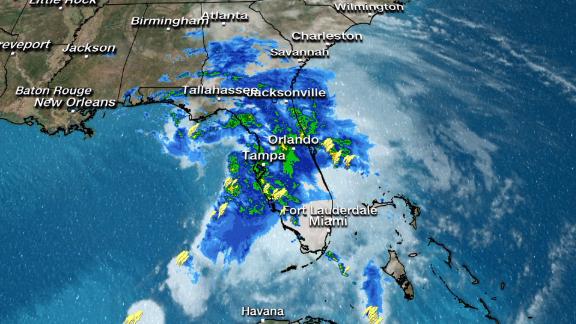 As Tropical Storm Nestor approaches the west coast of Florida, heavy rain and threats of tornadoes continue to worsen across the state.

Post-Tropical Nestor quickly crossed over the Florida Panhandle Saturday afternoon and moved on to bring high winds and heavy rain to parts of the Southeast.

The storm raked portions of south Georgia with wind and rain and is forecast to hit South Carolina later Saturday and Sunday.

By Sunday evening, a few counties in Georgia were under tornado warnings, and there were reports of a tornado in central Georgia.

At 5 p.m. ET, Nestor's winds were 40 mph, down from maximum sustained winds of 60 mph Friday evening, the National Hurricane Center said in its last advisory on the storm. The storm was downgraded by the hurricane center to a post-tropical cyclone earlier on Saturday.

The storm made landfall on Florida's St. Vincent Island Saturday afternoon after pounding parts of the Florida Gulf Coast with heavy rain, strong winds and storm surges, and spawned tornadoes in the Tampa Bay area.

Get the latest forecast and weather stories

There's a possibility of tornadoes Saturday night and into Sunday morning across the coastal Carolinas, the hurricane center said in its latest update.

Earlier, a series of tornadoes hit Polk and Hillsborough counties around the Tampa area Friday night, damaging about 50 homes, according to preliminary estimates, the National Weather Service said.

One twister caused a tractor trailer "to overturn" onto another vehicle on Interstate 4 in Polk County, according to Florida Highway Patrol Sgt. Steve Gaskins.

Debris from the impact then struck two other cars, both those vehicles were able to come to a "controlled stop," a FHP press release said.

Westbound I-4 lanes were closed following the accident at 11 p.m. ET Friday and reopened at 1:30 a.m. Saturday. No injuries were reported, the release said.

The Crisp County Sheriff in central Georgia reported a possible tornado, wrapped in rain, Saturday evening, according to the National Weather Service.

The storm is expected to dump 1 to 3 inches of rain over the weekend, according to the center. The center said earlier Saturday that rainfall of 2 to 4 inches was expected, with isolated totals of 8 inches possible.

The rain could be good news for inland residents who endured a dry and hot September. Alabama, Florida, Georgia and Mississippi all had their driest September on record.

Many areas across the region have experienced a flash drought due to the prolonged heat and dry conditions. Areas that weren't in any type of drought in August are now in severe to extreme drought.

The storm is forecast to move off the coast of North Carolina and into the Atlantic by late Sunday, the center said.