Hagibis is the longest-lived super typhoon this year 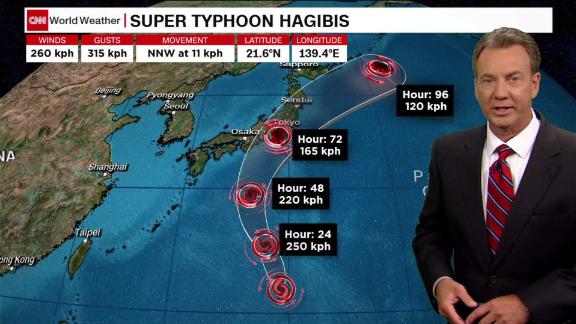 CNN meteorologist Tom Sater has the latest on where the powerful Super Typhoon Hagibis is heading and what impacts it will have on Japan.

It is spinning in the Western Pacific with a 55 kilometer (35 mile) wide eye and wind speeds comparable to a Category 5 hurricane.

The storm is now on track to have a direct impact on Japan this weekend. Early Thursday morning local time, it was tracking to the north-northwest. Friday, it is expected to start taking a shift more to the north-northeast.

This turn will have significant implications for the effects likely to be felt across Japan.

The current track from the Joint Typhoon warning center shows the center of the storm moving very close, if not directly over Tokyo, as a storm equivalent to a Category 2 hurricane. You can track the forecast path with CNN's storm tracker here.

The last storm to do this was typhoon Faxia, just one month ago. It killed three people and caused more than 7 billion in total economic losses in Japan, according to AON's September Global Catastrophe Recap.

Hagibis is forecast to make landfall very near where Faxia came ashore in September.

Depending on the exact trajectory and landfall location, Hagibis could push a significant storm surge of several meters into Tokyo Bay. The worst surge would occur if the storm makes landfall just to the west of the bay.

On Saturday, "conditions in Japan will deteriorate through the day with the worst moving through central Japan late Saturday into Sunday local time," said CNN meteorologist Monica Garrett.

Rainfall of over 250 millimeters (nearly 10 inches) is possible for some locations in south-central Japan.

Regardless of the exact timing and intensity, significant travel disruptions (both air and rail) are expected, as well as the potential for power outages for millions.

The Rugby World Cup is also taking place across Japan, and several matches will be impacted by strong winds and torrential rain. Cancellations are even possible due to the weather on Saturday, and on Sunday for the damage left behind.