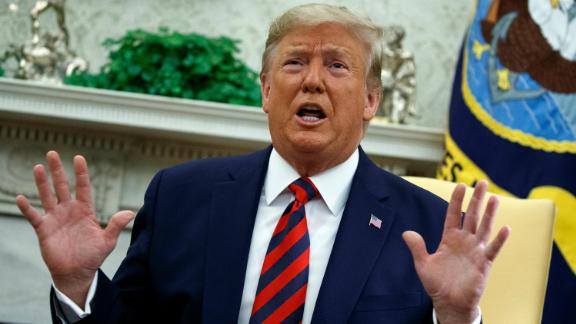 President Donald Trump called a whistleblower's complaint over his communication with a foreign leader a "ridiculous story," and describes the whistleblower, whose identity Trump said he does not know, as partisan. Trump reiterated his conversations with foreign leaders are appropriate.

The nation is lost in a new swirl of Trumpian confusion over a potential scandal. This time the particulars involve a whistleblower's complaint about a possible security breach at the highest level and the suggestion of a cover-up. Perhaps the only thing clear in this case is that once again President Donald Trump is calling the discordant tune.

True to form the President and his confederates are only adding to the chaos. In response to questioning from CNN's Chis Cuomo Thursday night, for example, Trump's personal lawyer and TV attack dog, Rudolph Giuliani, both denied and confirmed that the controversy may have to do with the fact that Giuliani has urged Ukrainian officials to investigate former Vice President Joe Biden. Biden is leading the pack of Democrats hoping to oppose Trump in 2020. Could it be that the President's lawyer is mixing politics and policy in an unsavory way?

As usual it's hard to follow the action, but what is known thus far should worry us all. According to various news outlets, the White House and Justice Department told the inspector general for intelligence matters there was nothing to the whistleblower's report that a high level official, most likely the President, communicated in some untoward way with a foreign leader.

Under apparent pressure from the White House and Justice, the acting director of national intelligence blocked the intelligence IG from notifying Congress of the complaint, sidestepping a law requiring this. Now Capitol Hill leaders and the administration are battling over just who has a right to see the complaint.

In a normal, pre-Trump Washington, the issue of such a complaint would have been handled in a routine, if not collegial, way. But in this era, when the White House stonewalls as a matter of course, such a conflict seems inevitable—and, too, that the President would act in a way so heedless that some intelligence professional would sound an alarm

But this new crisis is completely in character for Trump, who has always operated as if personal relationships, and his self-interest, are all that really matter in every context. In every organization he has ever led, from his businesses in New York to the US government he has insisted on being the sole authority and expert, a man who ignored the rules as a matter of routine.

During his decades as a real estate developer and entertainer, Trump's style meant that he controlled all of the many hundreds of entities under his organization's umbrella, and those who worked below him were charged with making sure his decisions -- whether good or bad -- turn out for the best, while he claimed credit for successes and dodged accountability for failures.

Then, and apparently now, Trump relied on his instinct, which often got him into big trouble. Multiple bankruptcies proved that Trump's decision-making gut is a less-than-perfect instrument. Upon examining his failures, Susan Craig, of The New York Times, declared, "We found most of it was just bad business."

As President, Trump has depended on unconventional operatives like Giuliani to help him in an unofficial capacity. For months Giuliani, the former mayor of New York City, has been trying to stir up concerns about Biden and his son Hunter's involvement with a Ukrainian energy firm. An official in that country told The Daily Beast that Trump is seeking compromising information.

Trump himself has said "it doesn't matter" if the President of the United States is engaged in this slimy business. In comments to reporters Friday, he added: "I've had conversations with many leaders. They're always appropriate."

Hope for real clarity on the matter is dimmed by the fact that Trump enjoys rubber-stamp support from the Republican-controlled Senate, which has approved nearly all of his nominees for federal positions only to see a record number leave their posts in short order. Most recently Trump was forced to withdraw his nominee for the top job at the Federal Emergency Management Agency amid an FBI investigation. FEMA is part of the Department of Homeland Security, where "acting" officials are found in striking numbers at the top of the organizational chart.

"Actings" are running things across the administration. In fact, the director of national intelligence caught up in the latest mess, Joseph Maguire, is on temporary assignment and, therefore, lacking the gravitas of an appointee who really owns the job. Although officials who lack permanent status surely suffer for it, their insecurity seems to suit Trump's seat-of-the-pants style. He has said he prefers provisional appointees because they are more readily moved in and out of positions. They might also be assumed to be more vulnerable to whatever pressure the White House applied.

The downside, of course, is that "acting" leaders may struggle to get anything done or to win the respect of their troops. (Imagine, for example, an army going into battle under a general whose stars were applied with Velcro and whose orders are under constant presidential review.)

Indeed, Trump has spent his life making sure that those who serve him feel like they are never quite secure, while at the same time he has sought to make himself immune to examination. As President, he has long banned note-takers from some talks with foreign leaders and then limited White House reporting on his phone calls with them. The current whistleblower controversy appears to be yet another case of Trump seeking ways to avoid accountability.

CNN reported Thursday that the White House and the Justice Department told the Office of the Director of National Intelligence that the nature of the whistleblower complaint isn't covered by laws governing intelligence whistleblowers.

According to CNN: "Previously the White House has cited longstanding precedent in refusing congressional requests for documents related to Trump's meetings with his Russian counterpart. 'It is settled law that the Constitution entrusts the conduct of foreign relations exclusively to the Executive Branch, as it makes the President 'the sole organ of the federal government in the field of international relations,' White House counsel Pat Cipollone wrote in a letter to Democrats in May."

The President defends his secretive dealings with foreign leaders by insisting that America's international success depends on his personal rapport with them. He says he has great relationships with the likes of Putin, North Korean strongman Kim Jong Un, China' President Xi and Saudi Arabia's Crown Prince Mohammed bin Salman.

Russia, China, North Korea and Saudi Arabia have all caused trouble to America during the Trump era, and his brand of personal politics hasn't seemed to help any. Instead, it has reinforced the suspicions that many held toward Trump when he was just a self-promoting businessman.

Back then, of course, his business was his business. Today, he acts on behalf of the American people. Earning their trust requires that he follow the rules.

6 Dr. Seuss books won't be published anymore because they portray people in 'hurtful and wrong' ways

13 people were killed in horrific crash after entering US through hole in Mexico border fence, officials say