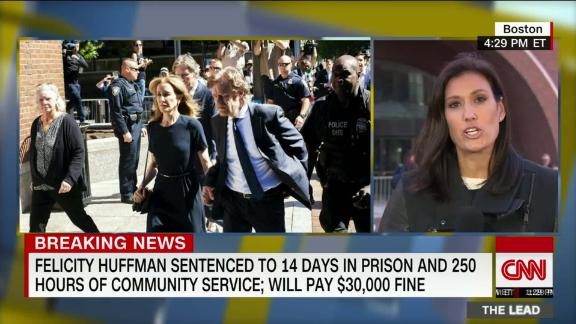 Wealth, privilege and celebrity will not be keeping Felicity Huffman, 56, out of jail. Apologizing and accepting responsibility, however, will certainly shorten the length of time she stays there. Judge Indira Talwani made the right call in imposing a 14-day sentence based on Huffman's role in the Varsity Blues college admissions scandal. She is also required to perform 250 hours of community service, pay a $30,000 fine, and be subject to supervised release for one year.

There's been a lot of speculation and debate over what kind of sentence Huffman deserved. I've found myself highly conflicted as to what the ultimate outcome should be. But I am perfectly OK with this one.

On the one hand, this scandal demonstrates how people with money and privilege have nearly unlimited opportunities to perpetuate their family's high status. The rest of society must play by the rules. Not everyone has the resources necessary to pay someone to take their child's SAT exam, or bribe a proctor to correct the test after it's taken.

As such, the less privileged are forced to implore their children to work hard, get good grades, and do their best to stand out among their peers. To earn a fair shot in life, they must rely on grit, hard work, persistence and determination. That includes doing community service and other volunteer work in their communities, aligning themselves with good teachers, and finding great mentors to guide and vouch for them.

Some people look at Huffman's crimes and ask who the victims are. The answer is simple. We all are victims — each person who makes efforts to live right and do right. All who follow established procedures, rules and protocols are victims, including the parents who try to do things correctly, and who teach their children to do the same. Every child who studies hard and commits themselves to doing the right thing is a victim as well. How many heartbroken children are there who didn't get into the school of their choice, but perhaps could have — if only they'd cheated?

Yet Huffman's conduct following the exposure of these crimes has exemplified grace, contrition, remorse and acceptance of responsibility. Instead of making endless excuses, trying to justify her behavior, and directing blame at others, she has owned her actions. That matters.

If there is one thing that our system of justice values heavily, it is a criminal defendant who takes responsibility and owns up to their transgressions. How many people try each day to deflect, misdirect and outright lie to escape blame? Too many. But not Huffman. Throughout this case, she has comported herself in a manner that so many can learn from.

First, she pleaded guilty in a court of law — because she was guilty. Second, all indications are that she has sought to repair her relationship with her family and daughter for concealing the help she was attempting to provide on her behalf. How hard it must have been for her daughter to ask her mom: "Why didn't you believe in me? Why didn't you think I could do it on my own?" Third, she released a statement apologizing to her friends and community who love her, hold her in high regard, and expected better. Fourth, she similarly expressed regret and sorrow to her fans and followers whose good will she depends on to make a living. Finally, she told Judge Talwani what she'd done, why she'd done it, and who she hurt in the process — without qualifying or justifying her misdeeds.

In imposing this sentence, the judge sent multiple messages. First, that money, power, privilege and celebrity will not keep you out of jail. Second, that our system of justice respects, appreciates, encourages and rewards those who come clean. Remember, Judge Talwani had the discretion and authority to place her in jail for many months longer than even prosecutors requested. And third, that those who respect the system will be respected by it — through judicial fairness, reason and rationality.

None of us are as good as we are on our best day, nor as bad as we are on our worst day. The value and measure of who and what we are lies somewhere in between. This was a dark day for Huffman. But the way she comported herself after her crimes will make it brighter. Not today nor tomorrow, necessarily — nor even after serving her 14 days. But somewhere down the road.

Huffman's crime vexes me. But her ownership of it has been impressive. The judge apparently thought so, too.

Lori Loughlin and her husband, Mossimo Giannuli, also stand accused in this case. I find myself wondering what they are thinking. What I'm thinking is that it's never too late to follow a good example.

This article has been updated to expand on the different strategies used to cheat on standardized tests in the college admissions scandal.