Sea turtles have been targeted multiple times this year in Florida. Another was just found with a spear in its neck 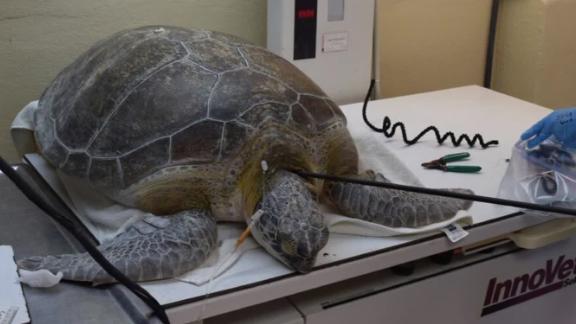 The 150-pound green turtle was taken into surgery, and the spear was removed.

A green sea turtle was found with a 3-foot-long spear in its neck and rescued, according to nonprofit Turtle Hospital in Marathon, Florida.

All species of sea turtles are threatened or endangered. They are protected under the United States Endangered Species Act of 1973 and Florida's Marine Turtle Protection Act.

"Human activities have tipped the scales against the survival of these ancient mariners," the World Wildlife Fund says. "Slaughtered for their eggs, meat, skin and shells, sea turtles suffer from poaching and over-exploitation. They also face habitat destruction and accidental capture in fishing gear."

A day after Splinter was rescued, he was "active and looking good in water," the hospital said.

Earlier this month, a Satellite Beach, Florida, woman reported finding sea turtle eggs and hatchlings that had been burned, according to CNN affiliate WKMG.

"There was firewood next to all the turtles," the woman told the station.

An investigation is underway in that case, and the Florida Fish and Wildlife Conservation Commission is seeking tips, an agency spokeswoman told WPEC.

A dead sea turtle was found in June in a Florida national park with a spear shaft through its head. The Biscayne National Park called on the public for any information about the turtle, according to its Facebook post.

That same month, a woman was arrested in Miami Beach after she was seen stomping on a sea turtle nest, police said.