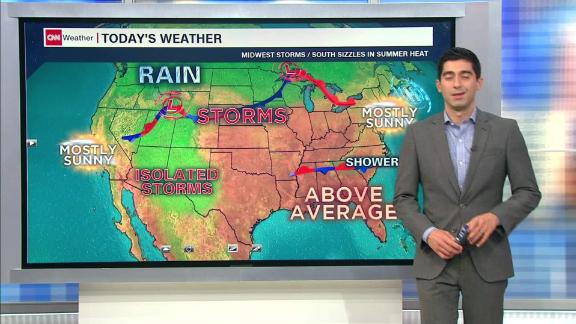 Summer heat continues in the south while severe storms threaten the mid-west. Also, today is the statistical peak of hurricane season.

Big Papi's back! David Ortiz threw out the first pitch before last night's Red Sox game at Fenway Park, his first public appearance since he was shot in the Dominican Republic.

The last contest of the 2018 election cycle could be considered the first of the 2020 cycle. Let us explain. A special election is being held today in North Carolina's 9th Congressional District. The State Board of Elections ordered up a new election after credible allegations of ballot fraud emerged during the 2018 contest. That's why Republican Dan Bishop is facing off against Democrat Dan McCready today. It's a heavily GOP district, but it looks like the race could be close. So, everyone is watching this one to see whether the Democrats can continue the success they enjoyed in the 2018 midterms or whether the popularity of President Trump -- who rallied there last night -- is still strong enough in a Southern state to help a GOP candidate win the day.

North Korea is back at it. The North fired off a couple of unidentified projectiles into the East Sea this morning. The launches happened just a couple hours after a North Korean diplomat said the country is open to restarting talks with the US. North Korea has conducted 10 launches -- believed to be mostly short-range missiles -- since May. President Trump has said he's not particularly worried about the launches and referred to them as "very standard."

Almost 5,000 Bahamians have left their country so far after Hurricane Dorian blasted through Grand Bahama and Abaco islands. But Bahamas Prime Minister Hubert Minnis promised that the country would start rebuilding the residents' communities so they could return home. There's still controversy brewing after 119 people hoping to evacuate Grand Bahama on a ferry were told to get off if they didn't have visas to enter the US. The ferry's operator apologized for the incident. And a US Customs and Border Protection official stressed that people from the Bahamas would be processed in an expedited manner if they came here because of the disaster. Meantime, survivors are telling harrowing stories of destruction and devastation. Three CNN reporters are sharing their stories, too, of what it was like to ride out Dorian and emerge to its aftermath.

The US extracted one of its spies out of Russia in 2017, partly over fears that President Trump and his administration repeatedly mishandled classified intelligence and could contribute to exposing the covert source as a spy. That's according to multiple Trump administration officials who talked to CNN for this exclusive report. The decision to carry out the extraction came after an Oval Office meeting in May 2017 in which the President shared highly classified intelligence with two Russian officials. The spy was the highest level source for the US inside the Kremlin and had access to Russian President Vladimir Putin, according to CNN's sources. White House press secretary Stephanie Grisham disputed CNN's reporting, saying it's "not only incorrect, it has the potential to put lives in danger."

The last crew member of a cargo ship that overturned off the coast of Georgia has been rescued. The Coast Guard pulled the man, who had been trapped behind glass in an engineering control room, out of the Golden Ray cargo ship to cheers and applause. The ship, which was carrying automobiles, capsized early Sunday in St. Simons Sound. Twenty crew members were rescued a few hours later. But fires that broke out on the Golden Ray prevented rescuers from freeing the final four crew members until yesterday. They went to hospitals.

A restaurant featuring cheese on a conveyor belt? No, it's not in Wisconsin. You'll have to travel to London for this dream eatery.

We've seen Barbie in just about every iteration you can think of, but this has got to be a first. Introducing the Day of the Dead Barbie.

What should you do if you open up your bank account and see $120,000 in there that you know isn't yours? Do the exact opposite of what this couple did.

In the latest edition of the Monopoly board game, women get more than men when they pass "Go."

Police in England thought they were headed to a plane crash. Instead, that bright flash in the sky turned out to be a meteor.

Apple is expected to show off some new iPhones today at a big media event, but don't expect anything earth-shattering.

Every wonder how Donald Duck answers the phone? This guy gives us a pretty good idea. (Click to view.)