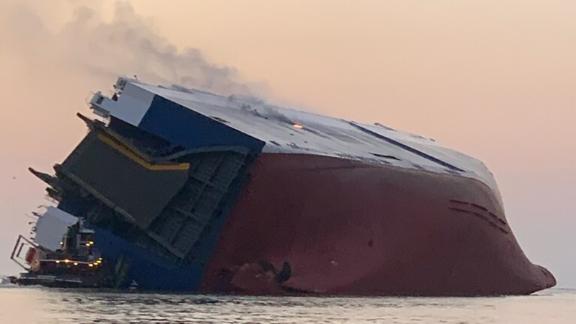 The US Coast Guard is pausing rescue operations for four missing crew members of a cargo ship that capsized off the coast of Georgia.

Four crew members of the Golden Ray are still missing a day after the cargo ship overturned in St. Simons Sound off the coast of Georgia.

The missing crew members -- all South Korean nationals -- have been confirmed to be in the ship's engine room, according to South Korea's Foreign Ministry.

But rescue efforts are at a standstill because a fire on the vessel endangered the safety of responders, authorities said. The 656-foot cargo ship remains on its side in the waterway, about 80 miles south of Savannah.

A call for help

The first dispatches from the boat came at around 2 a.m. Sunday morning, according to US Coast Guard Lt. j.g. Phillip VanderWeit.

South Korea's Foreign Ministry said the boat began "listing heavily," about 80 degrees, to the port side before overturning.

Twenty members of the crew were rescued by the US Coast Guard around 4 and 5 a.m., VanderWeit said.

Those rescued were exiting via various parts of the vessel, which posed a challenge in getting them off the ship.

Some crew members were hoisted onto helicopters while others were lowered, in some cases by fire hoses, onto boats, according to VanderWeit.

Four crew members weren't able to be rescued as fires broke out on the ship that prevented rescuers from continuing their response, Capt. John Reed, commander of the Coast Guard Sector Charleston, said at a news conference.

"As smoke and flames began to appear our crews, along with the Glynn County heavy rescue team, assessed that the situation was too risky to further go inside the vessel to attempt to locate the four individuals who remain missing at this time," Reed said.

Officials are waiting for the ship to stabilize before attempting any more rescues, Reed said, but aren't sure if the fire is out.

"We are unable to determine specifically without going inside whether the fire has been completely extinguished," he said.

Although rescue efforts have stalled, the Coast Guard remains on scene next to the boat as they try to stabilize the vessel.

VanderWeit said the Coast Guard continues to search around the vessel. But the "suspended" search means that they had to get off the vessel because of fires and instability.

Those who were rescued were offered assistance by the International Seafarers' Center in Brunswick, Georgia, according to the center's director Vicki West.

West told CNN via email that her organization provided food and clothing to between 18 and 20 crew members from the overturned cargo ship who were Filipino and South Korean.

She said the rescued crew members were in good condition.

Volunteers from her organization served them lunch donated by Grandy's, a local restaurant in Brunswick, and facilitated those that wanted to attend Mass at St. Francis Xavier Catholic Church.

Bags with hygiene items, socks, toothpaste, and games, some of which were donated to the center by the community, were also given to the crew members as they recovered from their harrowing night.

They also offered bibles and promise books to any of the crew members who might want them and they each took one, West said.

Officials are still trying to determine what caused the boat to overturn.

Two investigators from the National Transportation Safety Board are expected to arrive on the scene Monday, according to NTSB spokesman Keith Holloway.

His agency is supporting the Coast Guard's investigation of the incident.

The Coast Guard's damage assessment team was on scene Sunday night and other agencies assisting in the incident include Georgia Department of Natural Resources (DNR) and the Glynn County Fire Department, according to a news release from the Coast Guard.

South Korea's Foreign Ministry sent a consul from the Consulate General in Atlanta to the scene of the accident to determine the status of the crew rescue and provide consular assistance to South Korean crew members who were already rescued.

The Ministry of Maritime Affairs and Fisheries has formed a protection of overseas Koreans task force and is responding, the Foreign Ministry said in a statement.

The cargo ship, owned by Hyundai Glovis, carries vehicles and had just been unloaded and reloaded by longshoremen at the Port of Brunswick in the hours before it began leaning, according to a longshoreman who spoke to CNN.

CNN has reached out to Hyundai Glovis but has not yet heard back.

As investigators work to locate the missing crew members and determine the cause, pollution mitigation efforts are underway, according to Cmdr. Norm Witt of the Coast Guard's Marine Safety Unit Savannah.

No "active release" of pollution was reported as of Sunday afternoon but a unified command has been established to respond, Witt said.

Even though pollution has not yet been detected, officials with the Coastal Georgia Public Health issued a precautionary swimming advisory for St. Simons and Jekyll Island beaches and said the Coastal Resources Division of Georgia Department of Natural Resources will conduct water quality sampling to ensure the safety of shellfish harvesting beds and swimming beaches.