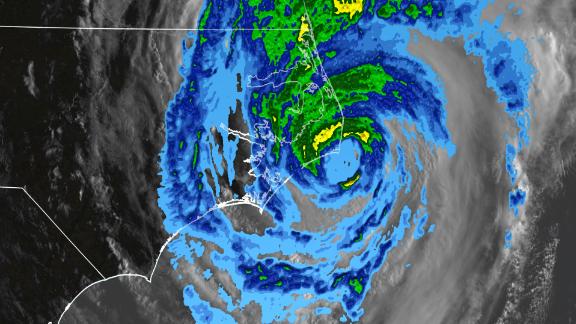 If you're worried about how the wild horses of North Carolina's Outer Banks are faring in Hurricane Dorian, know this: They have a special trick to survive hurricanes.

The news out of the Bahamas is growing more grim. The death toll from Hurricane Dorian is up to 30, but hundreds of people are still missing. So, more body bags and coolers are being brought in. And officials are warning people to prepare for "unimaginable information" on the death toll. There is some good news, though. The US Coast Guard has rescued 201 people, while a British naval ship is giving out food and water and clearing debris from streets.

Meanwhile, Dorian is lingering this morning just off the North Carolina coast, lashing that state and Virginia with rain, storm surges and strong winds. At least five people in the US have been killed by the storm, now a Category 1 hurricane. Dorian blew by South Carolina yesterday, leaving power outages, flooded streets and downed trees. Click here to track Dorian's path, get the latest updates, use CNN's lite site and find out how to help survivors.

Robert Mugabe, the founding father of Zimbabwe, has died. Mugabe, who was 95, ruled the country with an iron fist for more than three decades before getting pushed out of power two years ago in a coup. When he became the newly independent Zimbabwe's first prime minister in 1980, he was touted internationally as the hope of his nation. But he turned into a tyrannical leader who waged a campaign of oppression and violence to maintain power. He drove Zimbabwe, once known as southern Africa's breadbasket, into poverty. Read more about his complicated legacy here.

The five crew members who survived that hellish Labor Day diving boat fire told investigators they did all they could to save their passengers. One crew member said he woke up to a noise and saw flames shooting up from the galley area. The guests' sleeping quarters were below the galley. After several unsuccessful attempts to save the passengers, crew members said they had to jump from the boat. Thirty-four people were killed in the fire. Thirty-three bodies have been recovered, while one remains missing. Here's what we know about the victims.

A man on trial in one of the most deadly nightclub fires in US history was acquitted, while a jury couldn't reach a verdict for a second defendant. Max Harris was found not guilty of 36 counts of involuntary manslaughter in the 2016 blaze at the Ghost Ship warehouse in Oakland, California. Harris was the Ghost Ship's creative director. Jurors deadlocked over the second defendant, Derick Almena, the Ghost Ship's leaseholder. When the verdicts were read, family and friends of the people who died in the fire gasped and cried.

If you have student debt and signed up for a loan forgiveness program, don't skip this story. A newly expanded government program intended to make it easier for borrowers to apply for forgiveness of their student loans rejected pretty much everyone who applied -- about 99% of applicants, according to a new report. The Public Service Loan Forgiveness program -- established in 2007 and expanded in 2018 -- is supposed to help teachers, social workers and others who work in the public sector get their debt canceled after making 10 years' worth of payments. But borrowers say the qualification requirements were complex and poorly communicated by loan servicers. Many borrowers, after making 10 years of payments, found out they didn't have the right kind of federal student loan, were in the wrong repayment plan or worked for an employer that didn't qualify for forgiveness.

An American Airlines mechanic was arrested and accused of trying to sabotage a plane. The airliner, with 150 on board, was on the runway, set to take off July 17, from Miami to the Bahamas.

For years, high school football teams from El Paso and Odessa, Texas, duked it out. Last night, they came together to be strong after deadly shootings in their towns.

They won $15,000 with the Pulitzer Prize for covering the Tree of Life massacre, then gave it all to the devastated congregation they'd written about.

Staffers at a Seattle record store recently stumbled on some stunning mementos of Kurt Cobain, including an uncashed $26.57 royalty check.

Forget "Pink Friday." Nicki Minaj fans are feeling blue after the rapper and singer said she's retiring to "have my family."

This musician raised $500,000 for El Paso with a benefit concert this week.

"The best tribute to her ... is to spread as much love as you can today, and listen to music that fully inspires you."

The August jobs report comes out later this morning. Here are three things to watch for.

We've noted in this newsletter many times that Canadians are generally, well, really nice. So, what could possibly turn neighbor against neighbor in one town in Newfoundland? About 600,000 pairs of puffins. (Click to view.)