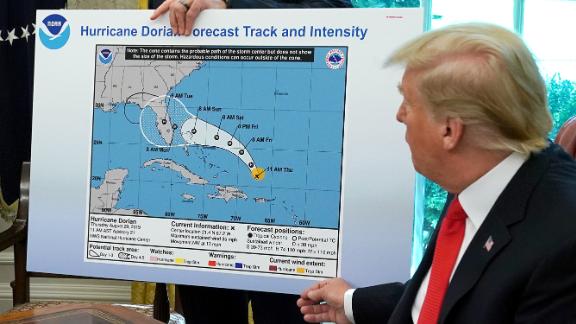 After backlash against President Trump for using an apparently altered map of Hurricane Dorian's trajectory showing the storm affecting Alabama, he took to Twitter to defend himself. CNN's Allison Chinchar and Joe Johns discuss why Trump's messaging and those models are so problematic.

By most people's standards, Justin Bieber has lived a full and -- to put it kindly -- experience-rich life.

At just 13 he was catapulted onto the music scene and became a pop star, quickly accumulating the kind of money and fame many twice his age wouldn't dare to dream of. Superstardom saw him transform from a poor 12-year-old who busked singing hymns in his hometown of Stratford, Ontario, to a wealthy but troubled young man who has had multiple run-ins with the law. He is still just 25. Had he attended, Bieber would not long be out of college. Now, four years since he first toyed with the idea of saying sorry in time to a preposterously catchy beat, Justin Bieber is doing it for real.

The boyish superstar posted a raw essay on his Instagram page on Monday, amounting to a catalog of his past wrongdoings. These included "heavy" drug use, disrespecting women, abusing his relationships, and letting his extraordinary fame and wealth at a very young age go to his head. It was an emotive and sincere outpouring of remorse, a sentiment too often left unexpressed.

By facing up to his faults -- and correctly identifying their genesis, he has shown more humility than men of twice his years. In fact, he's demonstrating more personal responsibility than two of the most powerful people on the planet.

It may seem extreme to compare a pop superstar like Justin Bieber to prime ministers and presidents -- that's because it is. To do so also makes a necessary and warranted point about what so many of us have grown numb to -- the lack of accountability for those in power. Bieber lives in the world of entertainment, but his willingness to apologize for his actions in a highly public way shines a spotlight on the fact that too often, in the world of politics, a refusal to say sorry is admired, even rewarded, in those who hold high office.

Consider the UK's current (things aren't looking great) leader, Boris Johnson. Johnson, whose shock of blonde hair and nonchalant exploitation of power are almost as iconic as they are unkempt, pushed energetically for Britain to leave the European Union in 2016. His Leave campaign was as deceitful as it was obnoxious, and his debunked claim about the amount of money that the UK would save on EU membership -- and that it could be spent on the National Health Service -- likely swung the vote in its favor.

Johnson, who is 55 years old and therefore -- at least numerically -- a seasoned adult, rarely expresses a shred of remorse for the myriad slip-ups, indiscretions, and outright lies which have peppered his entire professional career. And why would he? Unlike Justin Bieber, who as a child relied on food banks and the care of a struggling teenage mother, Johnson's entire life has been buttressed with privilege. And in his case, that privilege has fostered a monstrous sense of entitlement.

This week, Johnson fired his hero Winston Churchill's grandson from his own Conservative party, after said grandson -- MP Nicholas Soames -- defied Johnson in Tuesday's Brexit vote. Not only did Johnson lose the vote, which could ultimately lead to a no-deal Brexit being blocked, he also lost his parliamentary majority, and with it the last shred of his fledgling premiership's legitimacy. (To put Johnson's tenure in an American context, one law professor tweeted: "Congrats to Boris Johnson, who was a prime minister for 4.1 Scaramuccis before losing his parliamentary majority.")

Then, in the grand tradition of politicians who'd rather cut their noses off than give their face a break, Johnson threatened to call a general election two weeks before the official Brexit date. It's a distraction that neither his country nor his government can afford. Luckily, he lost that vote as well.

On the subject of imprudence enabled by massive economic privilege and power, you could carpet a luxury golf course with the things Donald Trump hasn't apologized for in his 73 years. A whistle-stop of the last week or so might include his cavalier attitude and spread of misinformation as Hurricane Dorian continues to devastate the east coast, "congratulating" Poland upon its commemoration of the Nazi invasion and the new findings that his family separation policy traumatized kids on the border.

As always, Trump has met criticism with venom, even railing against his media booster Fox News, which he complained isn't "working for us anymore!" The notion that not working for him might be an option -- not to mention necessary -- for an independent news network is so anathemic to his way of thinking that it seemed to Trump not only impossible, but offensive. For a president who has always been surrounded by yes-men, praise and indiscriminate support are not a bonus, they are the bare minimum.

In a related vein, one of the catalysts Bieber identified for his fall from grace was that, from the age of 13, he was surrounded by people who said that he was great. This was so ubiquitous that as he put it, he "never learned the fundamentals of responsibility." As a result, he found himself at 18 "with no skills in the real world, with millions of dollars, and access to whatever I wanted."

For Justin Bieber, the difference between his expectations as a child born into poverty and the reality of superstardom was so jarring as to scare him, and turn him into someone he found alien and disappointing. If such a stark change can come about in just a few years, what on earth are we to expect from men such as Johnson and Trump, who have received similar treatment since birth, and for decades longer?

One of the most heartfelt lines in Justin Bieber's essay is:"Humility comes with age." But that sentence rings with the naivety of youth. As the most powerful men on either side of the Atlantic are proving, when you've always known privilege, the prospect of accumulating more isn't just manageable, it's a birthright. In their eyes, they have nothing to apologize for.