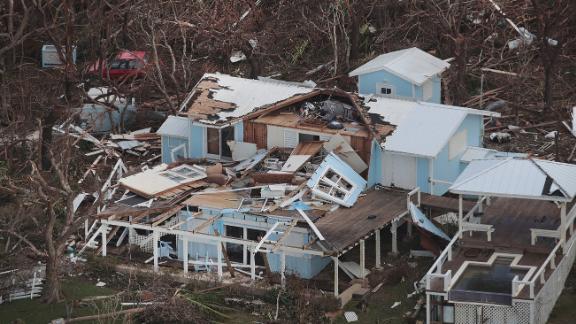 Bahamas resident Sharon Rolle tells CNN's Anderson Cooper about the scene in her neighborhood in the immediate aftermath of Hurricane Dorian.

Another season of America's other national pastime -- pro football -- kicks off tonight when the Chicago Bears take on their oldest rivals, the Green Bay Packers. Here's everything you need to get ready for the new season.

And here's what else you need to know to Get Up to Speed and Out the Door. (You can also get "5 Things You Need to Know Today" delivered to your inbox daily. Sign up here.)

Dorian strengthened to a Category 3 storm overnight as it crept along the southeastern US coast. It's pummeling South Carolina this morning with winds well over 100 mph and flooding the city of Charleston. Anywhere from 15 to 20 inches of rain is predicted to fall along South Carolina's coast. More than 73,000 people in South Carolina and Georgia are without power right now. Dorian could make landfall late tonight near Morehead City, North Carolina. Click here to get the latest on Dorian and to track the storm. And if you're in Dorian's path, use CNN's lite site for faster downloading.

Meanwhile, down in the Bahamas, the damage left by Dorian is being discussed in apocalyptic terms. On the northern islands of Abaco and Grand Bahama, entire neighborhoods have been wiped out and the international airport was obliterated. That's really bad news because it'll make it that much harder to get relief and aid to those who need it. Dorian was the strongest hurricane on record to ever make landfall in the country, and Prime Minister Hubert Minnis said it caused "generational devastation." The death toll now stands at 20, but it will rise as searchers comb the islands to assess damage. Click here for photos of the destruction and to find out how to help survivors.

Asian markets and US stock futures both jumped on the news that the US and China will return to the negotiating table to talk trade. The talks will resume early next month in Washington, and they will be the first face-to-face meeting of the two sides since the trade war's escalation over the past few weeks. The latest round of tariffs that both countries imposed on each other went into effect on Sunday. News of new talks will be welcome news to big businesses, which are starting to feel the bite from tariffs, and also to smaller companies that are truly suffering from them.

It was a day of double losses for UK Prime Minister Boris Johnson, and it's left his plan to pull Britain out of the European Union in shambles. First, lawmakers, some from his own party, voted to stop Johnson from taking the UK out of the EU without a negotiated deal. That's the dreaded no-deal Brexit that most everyone agrees would be disastrous for the British economy. Then, Parliament shot down Johnson's demand for an early election. The PM had hoped a new vote would break the Brexit deadlock by returning him to power with a bigger majority. So, what does Johnson do now? It's not clear, but he appears determined to keep the no-deal Brexit option alive.

CNN last night hosted a marathon of climate crisis town halls. Ten Democratic presidential hopefuls, over seven hours, laid out their plans to save the planet. Some of the big takeaways:

• Kamala Harris said she would ditch the Senate filibuster to pass the Green New Deal.

• Beto O'Rourke said he would push to use federal funds to help people in flood-prone areas move to higher ground.

President Trump and others in the GOP mocked the candidates via Twitter, and that, says CNN political analyst Stephen Collinson, is why running on the climate crisis is something of a risk for Democrats. "While going big on climate is the price of entry in their presidential race, it's yet to be proven as a shrewd general election strategy," Collinson says. Click here to read the 10 key lines and the best moments of the night.

Does the state you live in determine your lifespan? That's impossible to determine, but a new report from the CDC's National Center for Health Statistics notes that death rates really are markedly higher in the five US states at the top of the list. Those states -- Alabama, Kentucky, Mississippi, Oklahoma and West Virginia -- had an average death rate 49% higher than that of the five states with the lowest death rates, which are California, Connecticut, Hawaii, Minnesota and New York. The leading causes of death were the same in states with high and low death rates: heart disease, cancer, chronic lower respiratory diseases, unintentional injuries and stroke.

Yes, Oprah Winfrey has made an announcement about next year, but it's not what you thought.

Not all heroes wear capes

Meet the man who walked into a Costco in Florida and plunked down more than $49,000 to buy 100 generators that'll be sent to the Bahamas.

Taking a ride in the Taycan, Porsche's first electric car, means using computer touch screens because it has almost no knobs, switches or gauges.

China says it has developed a new drone that hunts other drones the same way Spider-Man takes down the bad guys.

"I wanted to take off my body like a jacket and leave it at the hospital with everything else."

Chanel Miller, describing how she felt after forensic exams following her rape in 2015 by then-Stanford University swimmer Brock Turner. Miller is now telling her story for the first time without anonymity in her new book, "Know My Name."

Pull up to the bar and watch this bartender pull off a nifty magic trick. (Click to view.)