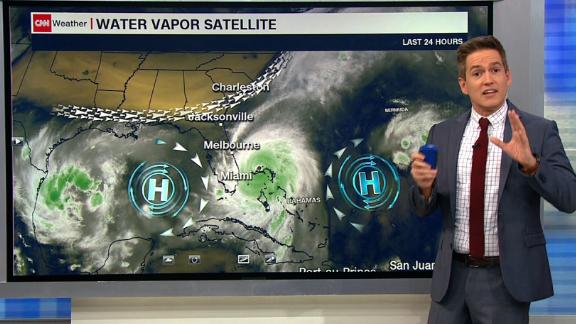 CNN meteorologist Ivan Cabrera says in all his years of covering hurricanes, he's never seen a storm behave like Hurricane Dorian which has stalled over the Bahamas.

Holiday weekend is over and you've got the back-to-work blues? It's not your imagination. It's a real thing, but it's also treatable.

Dorian is still in the Bahamas. The now-Category 3 storm pretty much parked itself over Grand Bahama Island after making landfall Sunday night. It's killed five people, devastated the island with high winds and rain and destroyed an untold number of structures. The storm is expected to slowly head north later this morning. Dorian will approach Florida's east coast tonight (but is not expected to make landfall) before skirting up the Georgia and South Carolina coasts tomorrow night. Then, it's due to roll "near or over" North Carolina's coast late on Thursday. Mandatory evacuations are in effect in the coastal areas of all of these states. Keep up with the latest here. You can also track the storm and watch live video as Dorian approaches Florida. And if you're in the storm's path, bookmark CNN's lite site for faster downloading.

The search and rescue effort to find survivors of a commercial diving boat fire off the California coast turns into a recovery mission this morning. Thirty-nine people were on board the 75-foot-long boat, Conception, when it caught fire early Labor Day morning near Santa Cruz Island. Only five people -- all crew members -- have been found alive. At least 20 bodies have been found so far. Authorities described the fire as a hopeless situation because the ship was in open sea, in the middle of the night, with a raging, out-of-control blaze. Click here to read the latest on this tragedy. And meet the couple who rescued the five crew members.

Is this the beginning of the end of the war in Afghanistan? An agreement "in principle" has been reached between the US and the Taliban, President Trump's special envoy for the country says. The deal would see the US pull almost all of its 14,000 troops from five bases across Afghanistan within 135 days, if the Taliban keeps its end of the deal, envoy Zalmay Khalilzad said. This all needs final approval by Trump, though. If the deal goes through, it would end the longest war in America's history: an almost 18-year-long conflict sparked by the September 11 terror attacks.

The man who killed seven people in a shooting rampage in Texas over the weekend had been fired just a few hours before the violence began. But the shootings didn't happen because he was fired, an FBI official said. The shooter was already "enraged" when he showed up to work. The man sprayed the road with bullets after police pulled him over on a traffic violation. He later hijacked a mail truck and shot people at random before police killed him. The victims ranged from 15 to 57 years old and included a US mail carrier and an Army vet. A 17-month-old girl and three law enforcement officers were among the 25 people injured.

Undocumented families hoping to defer deportation because of medical issues just got some good news. US Citizenship and Immigration Services said it will re-open some pending cases of those applying for relief from deportation because of medical conditions. USCIS had told these families a few weeks ago that the agency was no longer considering such requests, except for certain military exceptions. That set off an outcry (and news media coverage) that caused the agency to slightly reverse course.

A 14-year-old confessed to shooting to death all five members of his family last night in a town in the northern part of the state.

Lily missed the Jonas Brothers concert because she was in the hospital for a chemotherapy treatment. No worries. The brothers came to her instead.

Shawn Mendes finally admitted what we've known all along. He's in a relationship with ... somebody.

Revel (or recoil) in the details of the world's longest cruise: a 245-day lux journey through six continents and 51 countries.

10 Downing Street has another new resident -- a cute little rescue puppy. But no one knows how the famous residence's famous cat will take the news.

Tesla owners will soon be able to stream YouTube and Netflix right from the car's dashboard. Wait, is that even a good idea?

That's the speed, in miles per hour, that a specially modified Bugatti Chiron reached on a test track in Germany. It's a new record.

If you want to visit this 173-year-old restaurant built into the side of a Swiss mountain, you'll need to take a cable car and then hike part of the way there. (Click to view.)