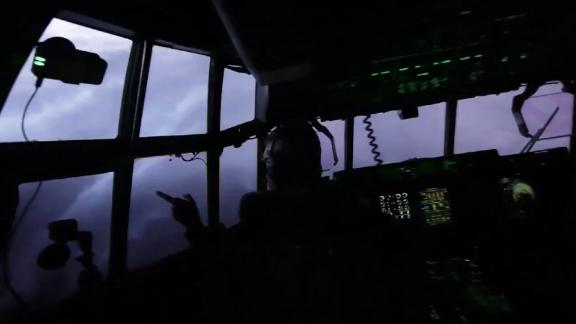 NOAA and US Air Force Hurricane Hunters captured footage from inside the eye of Hurricane Dorian.

You don't have to be down on Earth to comprehend the destructive power of Hurricane Dorian.

He took this dramatic photo of Dorian from the safety of his perch inside the International Space Station and shared it on Twitter earlier this week. The angle of the photo allows you to peer directly down into the monster storm's eye.

"You can feel the power of the storm when you stare into its eye from above," Hague wrote in the post. "Stay safe everyone!"

Dorian was a Category 5 storm when it made landfall in the Bahamas over the weekend. It stalled out and decimated portions of the country's northern islands before moving slowly moving north toward the southeast US coast. It's now a Category 2 storm that's skirting the coasts of Florida and Georgia.

If it moves a little bit to the west, it could make a landfall in either North or South Carolina, CNN meteorologist Judson Jones said.

A view from inside Dorian's eye has been captured, too, thanks to meteorologist, hurricane hunter and Air Force Capt. Garrett Black.

He snapped a breathtaking photo of Dorian's eye while flying through the storm on Sunday.

In the extraordinary photo you can see Dorian's eyewall, which is a solid wall of clouds, with the sun shining brightly through a blue sky above.