She missed a Jonas Brothers concert due to a chemotherapy treatment. So they came to her hospital room 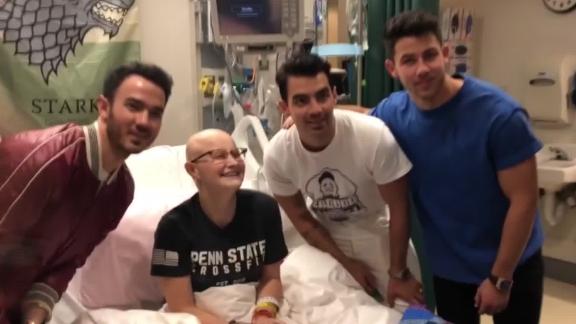 The Jonas Brothers made a surprise visit to 16-year-old fan Lily Jordan at Penn State Children's Hospital. Jordan was unable to attend their concert due to chemotherapy treatments.

If you're a sucker for a heartwarming surprise, you'll love this.

Before their concert in Hershey, Pennsylvania, the Jonas Brothers made a pit stop Saturday to reward a special fan.

Lily Jordan, 16, had jokingly invited the band to come visit her at Penn State Children's Hospital, where she's receiving chemotherapy treatment for cancer.

"I was supposed to be at your Hershey concert tomorrow but instead I'm across the street doing chemo," Lily wrote with a selfie on Instagram. "If y'all wanted to pop in I'll give you my room number."

Sure enough, her followers began sharing the post and tagging the Jonas Brothers. Soon it went viral.

Pennsylvania Rep. Scott Perry was one of the many people who shared Lily's story in hopes of capturing the Jonas Brothers' attention.

"PRAYERS NEEDED! Our good friend Lily is fighting for her life in Hershey tonight, and so badly wanted to see the Jonas Brothers tomorrow night at Hersheypark, but can't because of her urgent treatment," Perry said on Facebook. "If there is anyway for them to visit her, we are lifting up her hopes and our prayers for help."

The Jonases saw the posts and stopped by the hospital to surprise Lily shortly before the show. Nick Jonas even brought along his wife, actress Priyanka Chopra.

"Thank you for inviting us to come see you," Kevin Jonas told Lily in a video posted on the hospital's Facebook page. He said his entire feed was filled with requests to visit the teen.

Despite missing the concert, Lily said she had the time of her life meeting the brothers, who signed autographs and posed for photos with her.

Lily later posted about the surprise visit on Instagram.

"Wow. The power of social media you guys. YOU did this. YOU made my crappy chemo session into something incredibly special and unforgettable," She wrote.

"Literally made my life," she added.

The Jonas Brothers are currently on their "Happiness Begins" tour. Their next stop is Tuesday at PPG Paints Arena in Pittsburgh.