Florida's cities are building to fight rising seas. Small towns may struggle to defend themselves 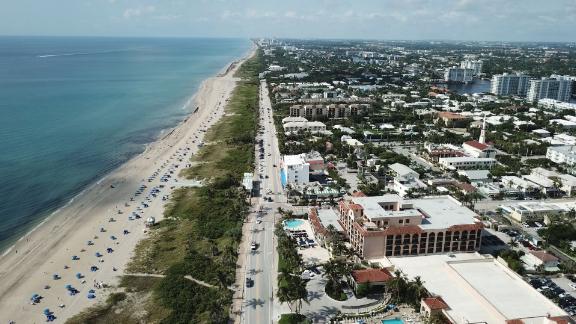 Miami Beach is spending half a billion dollars to defend themselves against the climate crisis. But smaller towns are also at risk, and some may not be able to afford to adapt.

His home here is on the the town's barrier island and backs up to the Intracoastal Waterway, which separates the island from the Florida mainland.

At just six feet above sea level, he lives in one of the lowest places in all of Delray Beach, an affluent city of 65,000 about an hour's drive north of Miami.

In more than two decades, he's seen hurricanes send water surging over his seawall and into his lawn. But now each fall during annual high tides, salt water creeps up into his garden and chokes his plants, even when there are no storms.

In other neighborhoods, these extreme tides bring water all the way to residents' doorsteps.

Delray Beach is joining other towns in the region that are developing plans to respond to the threat of rising seas, and it is finding that the defenses necessary are incredibly expensive.

Earlier this year, an engineering firm delivered a report to the Delray Beach city commission that found that eliminating flooding in the city' most vulnerable neighborhoods would cost an estimated $378 million.

For a city that says it has an annual budget of $130 million, the cost came as a shock to many, including the city's mayor, Shelly Petrolia.

"There's concern about how to pay for what needs to be done, but the good part about this is that we have at least an understanding of where we need to get to," Petrolia said. "Many cities like ours have not even gotten that."

Some think the question of how to pay for the defenses needed to ward off rising seas could become a serious crisis for small towns and cities up and down America's coasts.

One of them is Richard Wiles, the executive director of the Center for Climate Integrity, an advocacy group that calls for fossil fuel companies to pay for costs related to the climate crisis.

His group recently released a study estimating how much it would cost to build basic structures such as seawalls to protect 22 states and the District of Columbia against sea level rise expected by 2040.

That's more than six times the 2019 requested budget for the US Department of Education.

The study also only estimated the costs of building seawalls -- not installing pumps and other more expensive flood control measures that many towns and cities will need.

"We know based on the way we conducted the study that it's a low estimate," Wiles said. "It will cost more than that for the state of Florida to ultimately build these defenses."

Delray's more famous neighbor 60 miles to the south is Miami Beach, which is even more vulnerable to rising seas, with much of the city barely above sea level.

It is spending $500 million over multiple years to raise roads, install pumping stations and improve stormwater drainage to keep itself dry.

But with smaller tax bases to draw from, paying for engineering solutions that cost hundreds of millions of dollars may not be possible for many towns.

There are some federal funds available to municipalities for climate change resilience projects through the Department of Housing and Urban Development and other agencies, but Wiles says what's available comes nowhere close to what's needed.

He says it's a cost that is mostly going to come out of taxpayers' pockets.

There are also questions about how long South Florida can build its way out of this problem.

Over the centuries, the Dutch have developed a world-class system of canals, dikes and levees to keep their low-lying cities from sinking beneath the waves.

Others such as New York's Staten Island are building massive seawalls to shield the island from the combination of storms and sea level rise.

Some of those solutions are being employed in South Florida, but they may not be as effective here.

That's because South Florida sits on what was once an ancient coral reef, and the porous limestone beneath this part of the state is riddled with natural underground "pipes" that allow water to bubble up to the surface, according to Jayantha Obeysekera, director of Florida International University's Sea Level Solutions Center.

With sea levels projected to rise as much as six feet by 2100, Obeysekera says there could come a time when no amount of walls or pumps can keep the water from rising through the ground.

"There's a tipping point at which those solutions might not work," Obeysekera said. "But it is very difficult to predict when that tipping point is, so I think it's prudent to look at how long we can buy with these solutions."

Since receiving the report, Delray Beach says it has begun repairs to one pumping station and is developing plans to protect two more of its most flood-prone neighborhoods.

There is much more that will need to be done in the coming years, and some towns have begun to band together to share the costs posed by the climate crisis.

Delray Beach is one of 10 Palm Beach County towns that have joined the Palm Beach County Coastal Resilience Partnership, an alliance funded by a grant from the Florida Department of Environmental Protection that allows the cities to pool resources and collectively assess their climate vulnerabilities.

Nancy Schneider, a former senior program officer to the Southeast Florida Regional Climate Change Compact who also lives in Delray Beach, says she is confident that if the city budgets responsibly and works with neighboring towns, it can save itself from going underwater -- literally and financially.

But without significant federal financial support, she says, it will be tough.

"This is what it's going to take for us to be able to stay in Florida," Schneider said. "I don't know if people really want to admit that yet."