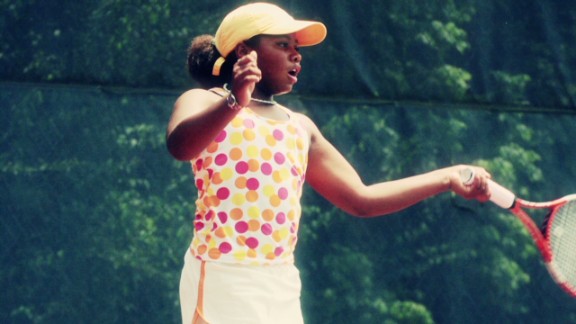 Teen tennis star Taylor Townsend was once told by the USTA she was too overweight to play professionally.

Taylor Townsend has created a seismic impact in the US Open women's singles draw.

The 23-year-old American has upset Wimbledon champion and No. 4 seed Simona Halep 2-6, 6-3, 7-6(4) at Arthur Ashe Stadium, the largest stadium in the world for tennis.

It's Townsend's first win in 11 tries against a player in the top 10. She's currently ranked 116th in the world.

"This means a lot," Townsend said through tears on court to ESPN.

This is Townsend's first time reaching the third round at the US Open, matching her best result in majors. She will face another Romanian next in Sorana Cirstea, who defeated Aliona Bolsova 3-6, 6-4, 6-2 earlier in the day.

"It's been a long road," Townsend said in her post-match press conference. "A lot of haters, a lot of people who weren't sure. I mean, I've heard it for a really long time that I was never going to make it, that I wasn't going to be able to break through or do this or do that. Sometimes when you were close, you never quite got over it, it's always the word 'talented' or something like that.

Plummet in the rankings

Born in Chicago and now residing in Atlanta, Townsend once was the top-ranked junior in the world. When she was 18 years old in 2014, Townsend -- while some were criticizing her weight -- reached the third round of the French Open. By the end of that year, she was ranked 102nd.

But in 2015, she plummeted down to a year-end No. 304. Townsend climbed back up the hard way, playing in ITF Futures events. She has traveled all over the US, including to Pelham, Alabama, where she played a 69-year-old, whom Townsend beat 6-0, 6-0 in a qualifier in 2016.

Townsend broke into the Top 100 near the end of 2017, reaching as high as No. 94. She did so by winning titles in three of her final five tournaments of that year, all at the ITF level. She's been on her way back up since.

"I actually went on a social media sabbatical for, like, a year and a half," Townsend said in her post-match press conference. "I was just tired of it. I didn't really know why it was bothering me. I was just, like, I can't do this anymore.

"Then I got back on. I think it was more growth, like, in myself, saying, 'When do you ever meet these people? Like never.' You know what I mean? Like realizing that the things that people say don't matter. It's about how you feel about yourself, about how you feel going out on that court.

"Anything that anyone has to say, it literally is null and void. I truly believe that from the bottom of my heart now. You can say it, and a lot of people say it, and talk the talk but don't walk the walk. You know what I mean?

"For me, I truly believe that. I know where I stand. I know who I am. I know what makes me tick. Going along with that, like I said, sometimes it works, sometimes it doesn't. You dust yourself off and you keep going."

On court after Thursday's win, Townsend gestured toward her player box, giving credit to her coach, Donald Young Sr.

"Every person says they've been through a lot," Townsend said. "Thank you to all of my friends and family that are over there. They've been with me for a really long time, and my coach, he's known me forever. He's gotten me over just being able to take control of my mind and understand you're in control of everything, being your own person, being strong, and being able to believe in yourself no matter what situation you're in and to be able to stand on your own two feet. You win, you lose, but, you know, it's all you."

'You have nothing to lose'

This is Townsend's fifth US Open appearance in the main draw and her 17th time playing in a major. But she had to get in this year's tournament the hard way, having to fight through three rounds of qualifying. That included trailing Nina Stojanovic in the final round of qualifying by a set and 5-1 in a second-set tiebreak.

She may just be 23, but the lefty's serve-and-volley game has a bit of an old-school flair. She came to the net more than 100 times in the match against Halep.

"That's definitely a part of my game, and I knew that I am not going to beat her from the baseline," Townsend said. "So I had to do something that gave me an edge, and it kind of just gave me energy. Shout out to my trainer for all of the sprints."

In her three previous meetings against the two-time major champion, Townsend had never even won a set.

"When I have played her before, I was just trying to make balls, I think I played not to lose, and today I just played to win. I said, 'Eff it.' I mean, I don't really think I can say what was going on in my head just because of TV, but I just told myself this is an opportunity, it's a chance, and go for it. You have nothing to lose."