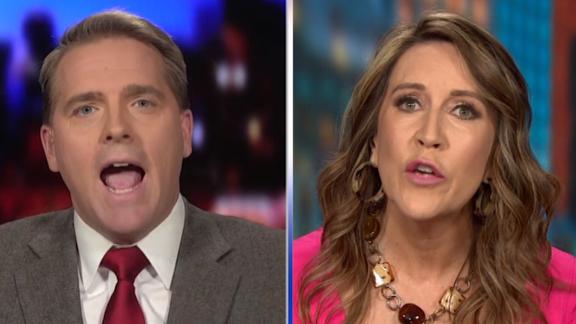 CNN commentators Maria Cardona and Scott Jennings spar over President Trump's recent comments about Puerto Rico and Florida as Hurricane Dorian makes its way towards the US.

Want to see the northern lights? You don't have to trek all the way up to the Arctic Circle. This holiday weekend, the aurora borealis will be visible from Idaho to Maine.

Florida residents are preparing for Dorian's arrival, and the Category 2 storm could strengthen into a Category 4 monster by the time it arrives. This morning, Dorian is moving through the Atlantic Ocean with winds of 105 mph. It should be a Category 3 hurricane on Sunday when it goes through the Bahamas. Then, Dorian, the strongest storm so far of the Atlantic hurricane season, is expected late Monday to hit Florida's east coast. The cone of uncertainty for this storm extends from Jacksonville all the way to Key West. Track the storm, scroll through this hurricane checklist and use CNN's lite site for fast connectivity if you're in the storm's path.

As Hong Kong gears up for its 13th straight weekend of mass protests, some of its highest profile pro-democracy leaders are in jail. Joshua Wong, who led massive protests in 2014, and activist Agnes Chow were among those arrested this morning in Hong Kong. Anti-government activist Andy Chan was arrested last night at Hong Kong's airport. They were charged with offenses, including organizing an unauthorized assembly, obstructing police and suspicion of rioting. The arrests could inflame already heightened tensions before this next planned round of demonstrations. Protesters have been calling for full withdrawal of an extradition bill, an independent inquiry into police brutality and universal voting rights in Hong Kong.

For the next 60 days, the use of fire to clear land in Brazil is banned. Brazilian President Jair Bolsonaro enacted the ban this week in response to the massive fires that have raged through the Amazon rainforest there. Burning land in rural areas is a common practice among Brazilian farmers, who often use fires to clear land for new crops or livestock. Bolsonaro wants the Amazon opened up to development, so a lot of experts point the finger at his pro-development policies and lax regulation as the reason ranchers and farmers are burning the rainforest.

Looks like the Trump administration is all set to start using military construction funds to begin building the President's wall on the US-Mexico border. Trump used an emergency declaration in February to justify using military money. That's faced stiff legal challenges, but the Supreme Court last month OK'd the use of $2.5 billion in counter-drug funding from the Defense Department to start building parts of the wall while the rest of the legal battle plays out in court. It's unclear when the Pentagon would start to shift the funds to wall construction, but White House officials have ramped up talks in the last couple weeks to start planning for it.

Asian markets followed Wall Street's lead and rallied today, buoyed by some positive talk from China on the trade war. It wasn't much -- just China's commerce ministry saying the country can reach a resolution on the trade dispute with the US with a "calm attitude." But that was enough to spark some optimism. US stocks jumped 326 points yesterday. That's the best day for Wall Street in about two weeks. But the economic news wasn't all good. The increase in the gross domestic product for the second quarter was revised down to 2%, while pending home sales dropped sharply this summer because of lingering uncertainty about the economy.

A sports betting site is offering an NFL food tester gig that involves traveling to stadiums and eating all the food. It's like they've lived inside my dreams.

It's almost September, which means it's almost time for Apple to unveil its new iPhones. The tech giant is expected to show some new stuff on September 10.

Silver is the new red? That's the trend in party cups. Reusable, aluminum versions of the ubiquitous red party cups are about to hit the market.

For research purposes only

A US government agency that makes all kinds of top-secret stuff needs an underground lair. Like, by the close of business today.

There are fewer than 7,500 cheetahs in the wild, but they're increasingly sold in the illegal pet trade as symbols of wealth in this region.

A. the Persian Gulf

C. the Midwestern US

The number of police departments that video doorbell company Ring is working with to streamline their access to user videos. Privacy advocates worry Ring is helping the police create a 24/7 surveillance network.

"Jeopardy!" host Alex Trebek, revealing in a new video that his chemotherapy treatments are over and he's back at work taping a new season of the game show. Trebek was diagnosed this year with stage 4 pancreatic cancer

Since his human is too busy skateboarding, Mango the dog just grabs the leash and does the job himself. (Click to view.)