Lawyers say an unarmed man who didn't speak English was killed by police. Now his family has filed a claim for damages 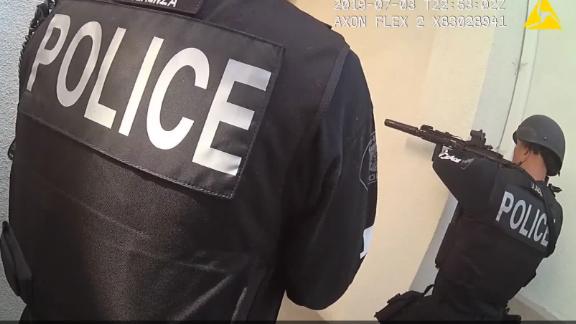 Li Xi Wang was fatally shot by the Chino Police Department in July. His family has filed a claim and will seek legal action against the city.

The family of an unarmed man killed in an officer-involved shooting in Chino, California, has filed a claim for damages against the police department, the family said.

Li Xi Wang, 49, was killed July 3 as police officers were serving a search warrant at a home in connection to an investigation of an illegal drug cultivation and trafficking operation, Chino Police Chief Wes Simmons said in a video statement posted to the department's YouTube channel, which included body cam footage of the shooting.

Police say they seized nearly 1,500 marijuana plants, $35,000 in cash and found evidence of grand theft in excess of $105,000, Simmons said. Police said no weapons were found in the home.

But an attorney for Wang's family condemned the shooting, saying the police department's account was a "one-sided story."

Wang did not speak English, according to his family's attorneys. In the family's claim for damages, they allege that the police never established "any form of effective communication" with anyone in the house.

He immigrated to the US in 2005 and worked to support his family at a restaurant and as a contractor.

"He's a single father, helping his son, he has an aging mom in China, and he did everything he can as a father, as a son, to take care of the family," attorney Daniel Deng said in a news conference Wednesday.

When marijuana was legalized, Deng said, Wang looked for a job, and ultimately was hired to cultivate marijuana.

"He's not a drug dealer, he's not a smuggler. He's just a simple worker trying to make a living by taking care of marijuana," Deng said.

The experience was incredibly difficult for Wang's family, Deng said, who had to decide to take Wang off life support a week after the shooting.

Asked what exactly about the cultivation operation was illegal, Sgt. Nancy Franklin with the Chino Police Department referred CNN to the state's health and safety code regarding marijuana laws. Under California law, it's illegal to possess and cultivate more than six living cannabis plants.

Wang was hiding behind a door, video shows

In the police department's video, Chief Simmons said the shooting is the subject of three separate and independent investigations by the San Bernardino County Sheriff's Department, the district attorney's office, and the Chino Police Department itself, which is conducting an internal review to see if the shooting followed department policies.

The body camera footage, which was edited into brief segments by police, begins with several officers from the department's special enforcement team standing outside the door of a home, getting ready to serve a search warrant. The entire unedited body cam footage has not been released.

Franklin, of the department's Professional Standards Unit, explained in the video that "these warrants are considered high risk because drug trafficking suspects are often armed and dangerous."

The body camera footage shows officers knocking on the door and announcing themselves three times before breaching the home with a ram.

A woman inside is immediately taken out and asked if there is anyone else inside the home. She repeatedly shakes her head, indicating there's no one else inside, but it's unclear in the video whether she understands English. She was handcuffed and arrested for cultivation of marijuana and grand theft.

The footage then shows officers moving methodically throughout the house to find any additional suspects.

Soon after, the officer wearing the body camera sees a man hiding behind the front door leading back outside. The officer immediately tells the man to show his hands, telling him, "Let me see your hands, dude," but a shot immediately rings out as he raises his gun. The video is then edited so any talking or interaction between the officers in the immediate aftermath of the shooting cannot be seen or heard.

Officers called for help and rendered aid at the scene, Franklin said, but Wang later died at a local hospital.

Simmons said in the video that immediately after the shooting the department contacted Wang's family to offer its condolences.

"It's tragic for all parties whenever there's an officer-involved shooting, for those involved and their families, for the officer, and for our police department," Simmons said. The department is cooperating fully with the other investigating parties, Simmons said.

The officer was initially placed on administrative leave, according to a news release from the city. It's unclear whether he has returned to duty.

Family attorney: No one present in the residence spoke English

In a claim for damages against the department, Wang's family said potential causes of action include wrongful death, negligence and federal and state civil rights violations, among many others.

The claim was sent to the city on Tuesday. It is the initial step to a lawsuit, which can be filed by Wang's family if the city rejects the claim. Attorney Brian Dunn of the Cochran Firm said claims are traditionally denied in cases like this and that the next step would be filing a federal lawsuit alleging Wang's civil rights were violated as well as a state lawsuit alleging wrongful death.

According to Wang's family, neither he nor the woman spoke English, and the claim cited "a plainly obvious language barrier" between the officers and the woman.

The claim, which seeks damages in excess of $10,000, says that Wang was "not armed with any kind of weapon, and posed no reasonable or credible threat of violence to any person."

"When he was shot dead, Mr. Wang was passively standing, was not holding anything in his hands, and made no physical movements which would indicate to a reasonable officer that Mr. Wang had will, or the ability, to physically injure any person," the claim states.

The cash found at the house was Wang's life savings, along with the woman's, who was Wang's friend, the attorneys said.

"Police are trained that deadly force is supposed to be a last resort, it's supposed to be used only when other means of control don't work," Dunn said, adding, "As is readily apparent from the video, none of those circumstances existed."