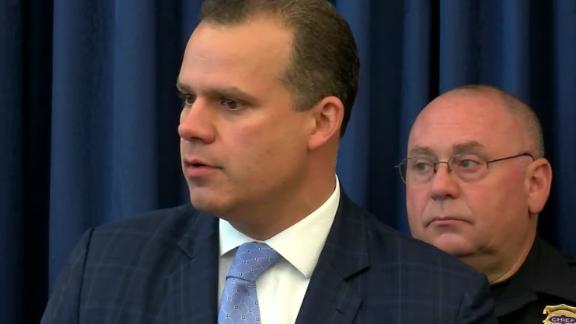 A federal prosecutor used a routine news conference announcing criminal charges to deliver a harsh message to those who advocate white supremacy and white nationalism.

A federal prosecutor used a routine press conference announcing criminal charges on Thursday to deliver a harsh message to those who advocate white supremacy and white nationalism.

Justin Herdman, the US attorney for the Northern District of Ohio, announced one count of transmitting threatening communications via interstate commerce against James Reardon, a self-described white nationalist.

Reardon's Instagram account was filled with anti-Semitic slurs. One post included a video of a man shooting a rifle amid sirens and screams. It was tagged to the Jewish Community Center of Youngstown and captioned, "Police identified the Youngstown Jewish Family Community shooter as local white nationalist Seamus O'Rearedon," according to Andy Lipkin, executive vice president of the Youngstown Area Jewish Federation. Seamus O'Rearedon is a Gaelic version of Reardon's name.

Herdman, a former assistant district attorney in Manhattan, said he wanted to speak directly to those who support Reardon's views.

"Go ahead and make your case for Nazism, a white nation, and racial superiority," he said. "The Constitution may give you a voice, but it doesn't guarantee you a receptive audience. Your right to free speech does not automatically mean that people will agree with you. In fact, you have a God-given and inalienable right to be on the losing end of this argument.

"What you don't have, though, is the right to take out your frustration at failure in the political arena by resorting to violence. You don't have any right to threaten the lives and well-being of our neighbors. They have an absolute and God-given and inalienable right to live peacefully, to worship as they please, to be free from fear that they might become a target simply because of the color of their skin, the country of their birth, or the form of their prayer."

He added, "Threatening to kill Jewish people, gunning down innocent Latinos on a weekend shopping trip, planning and plotting to perpetrate murders in the name of a nonsense racial theory, sitting to pray with God-fearing people who you execute moments later - those actions don't make you soldiers, they make you cowards. And law enforcement does not go to war with cowards who break the law, we arrest them and send them to prison."

Herdman acknowledged that the Constitution protected the rights to white supremacists and white nationalists to speak, think and believe their "hatred and failed ideologies."

"Keep this in mind, though. Thousands and thousands of young Americans already voted with their lives to ensure that this same message of intolerance, death and destruction would not prevail. You can count their ballots by visiting any American cemetery in North Africa, Italy, France or Belgium and tallying the white headstones. You can also recite the many names of civil rights advocates who bled and died in opposing supporters of those same ideologies of hatred. Their voices may be distant, but they can still be heard."