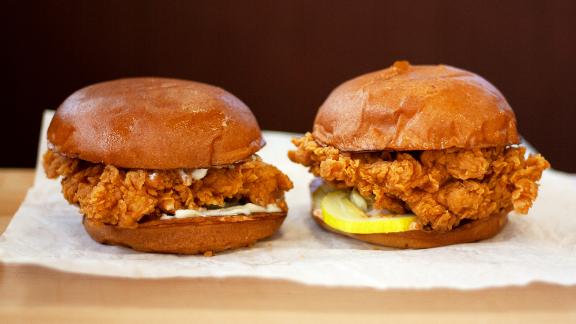 Popeyes launched their first fried chicken sandwich on August 12, igniting a feud between fast food chains and raking in millions of dollars in ad value.

From the World Cup to the NFL? USWNT star Carli Lloyd reportedly got offers to kick in preseason games after smashing a 55-yard field goal at a Philadelphia Eagles practice.

Jeffrey Epstein is dead, but his victims still told their stories. More than a dozen women who have accused Epstein of sexual assault and abuse spoke yesterday in court in Manhattan. The unusual hearing was called as part of the closing chapter of the federal criminal case against Epstein. When he died, one of the biggest concerns for his victims was that they would never get any kind of closure or sense of justice. Among the victims who spoke, some put Epstein's actions into a larger context, nodding to the ongoing criminal investigation of the crimes to which he was linked. "This is not about how he died but about how he lived," Virginia Roberts Giuffre said during her testimony. "He did not act alone. We trust the government is listening."

US Border Patrol agents in the past week have found the bodies of three people who tried to cross the southern border into the US. Two bodies were found in the Rio Grande, with the third found in a patch of brush. The deaths are not related, but they are part of a larger problem: Advocates have warned that stricter immigration policies could lead to more deaths as migrants are forced to cross through more dangerous areas. In other immigration news, the Trump administration announced yesterday that it plans to shift at least $155 million from the Federal Emergency Management Agency disaster relief fund to immigration enforcement policies.

Speaking of disaster relief, Tropical Storm Dorian is expected to make landfall today in Puerto Rico, bringing with it dangerous flash floods. The island is still recovering from 2017's Hurricane Maria, so any impact could have devastating effects on an already-depleted infrastructure. Dorian is supposed to become a Category 1 hurricane by Friday evening as it tracks east of the Bahamas. That means Florida could see a hurricane over Labor Day weekend, but the operative word here is "could." CNN's meteorologists say it's too early to forecast impacts, so don't cancel any travel plans just yet.

The US Department of Veterans Affairs is investigating 11 suspicious deaths at the Louis A. Johnson VA Medical Center in Clarksburg, West Virginia. The VA isn't releasing too many details but says it's looking into "potential wrongdoing" and a "person of interest" who is no longer in contact with patients. One of the deaths is a confirmed homicide. Relatives of one deceased veteran claim he was injected with a fatal dose of insulin, thought he was never diagnosed with or treated for diabetes. According to a claim filed last week, nine or 10 other patients had died from low blood sugar before April 2018.

Brazilian President Jair Bolsonaro yesterday morning rejected $20 million in international relief to combat the wildfires eating away at the Amazon rainforest. Before the day was through, the Brazilian government walked back the rejection and now says it will accept the money. But there are still concerns about how the government will be able to administer the aid. Bolsonaro has made his apparent apathy about the situation quite clear, engaging in a protracted spat with French President and G7 leader Emmanuel Macron over proposed international solutions to the crisis. Meanwhile, global concern over the Amazon has moved some to question why more isn't being done about the thousands of apparent fires burning in central and sub-Saharan Africa. The answer is complicated, but people there say many African fires are controlled agricultural burns, not uncontrolled deforestation, like in the Amazon.

Sorry everyone, Popeyes' chicken sandwich is sold out

Please regroup, rest up and strategize for when it comes back.

It's gonna be a really cold winter, according to Farmers' Almanac

This is the weather equivalent of seeing Christmas decorations in stores in August. We don't want to think about it yet!

China got its first Costco store and people went berserk

Wow, that sentence did not end the way we thought it would.

A giant asteroid will whiz by Earth next month

Thank goodness it won't hit us. We still need to see that Cheetos movie!

The number of cities, counties, communities and tribal lands suing drug maker Purdue Pharma. The cases are being combined into a joint case in Ohio, and Purdue is offering between $10 and $12 billion dollars to settle. The talks follows this week's landmark Johnson & Johnson ruling.

"I know y'all probably got family members in jail or people going through the same thing as me, and I will continue to do what I do with the reform movement and help the people who help me."

Rapper Meek Mill, who has spent most of his adult life in jail or under court supervision due to minor charges. His case has been a huge social justice cause, and he recently announced he is no longer on probation.