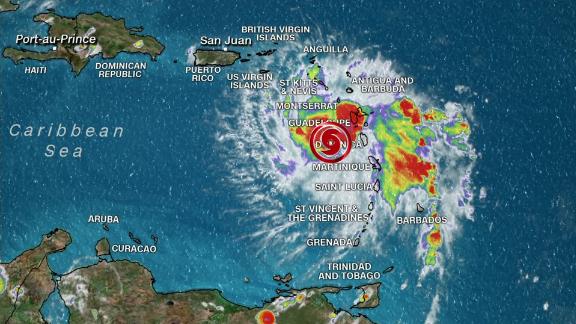 Florida is bracing for Tropical Storm Dorian, which is expected to strengthen into a category 2 hurricane by the time it reaches the state -- just in time for Labor Day weekend.

Tropical Storm Dorian is set to slam Puerto Rico's eastern half Wednesday afternoon with heavy rains -- and potentially flooding and landslides -- along roughly the same path that Hurricane Maria took to devastate the island two years ago.

Dorian's wind speeds won't approach those of the Category 4 storm that left 2,975 people dead in 2017. But they'll be enough to strain Puerto Rico's fragile power infrastructure, CNN meteorologist Chad Myers says, and spread misery across a territory where blue tarps still cover some of the holes that Maria ripped in homes' roofs.

Dorian could dump as many as 10 inches of rain in parts of Puerto Rico and the British and US Virgin Islands, the National Hurricane Center says.

"That means flooding, and you can get some landslides, too. So, we've just really got to pay attention," Ken Graham, the center's director, told CNN's "New Day" on Wednesday.

Dorian's center was in the Caribbean Sea on Wednesday morning, southeast of the US Virgin Islands, with maximum sustained winds of 60 mph. Its outer bands were dropping rain on St. Croix.

After it passes Puerto Rico, Dorian will strengthen over warm Atlantic waters and is expected to approach Florida or other parts of the US Southeast coast over the Labor Day weekend as a hurricane. It's still far too early to know exactly where or when the storm could hit the US mainland.

"There's already so much damage on the ground from (Maria) that this isn't going to take a lot to make a significant amount of damage, especially flooding," Myers said.

In the city of Ponce on Puerto Rico's southern coast, people still have tarps over their homes, Mayor Maria "Mayita" Melendez told CNN. The city was hit with $1 billion in damages from Maria, she estimates.

One resident, Lucy Beascochea, said the tin roof over her home still has holes in it, meaning every time it rains, water leaks in. She is nervous about the approaching storm, she told CNN.

Puerto Rico Gov. Wanda Vázquez Garced on Monday declared a state of emergency for the island and urged people to prepare for the storm.

"For citizens who do not yet have safe roofs, we will have shelters ready," Vázquez said on Twitter.

About 360 shelters are available across the island for a capacity of 48,500 people, the government's official Twitter account said Monday. And about 70 hospitals were prepared to handle emergencies, officials said.

"Thankfully, I've been preparing since May," said Krystle Rivera, whose family has been stocking up on water, canned food and gas in anticipation of the hurricane season.

Though not yet a hurricane, Tropical Storm Dorian is expected to bring severe conditions to the Caribbean.

From Wednesday to Thursday, Puerto Rico could get 4 to 10 inches of rain, and the US Virgin Islands, Haiti and Dominican Republic could receive up to 4 inches, according to the hurricane center.

After passing Puerto Rico, Dorian is forecast to move near eastern Hispaniola on Thursday and move north, the hurricane center said.