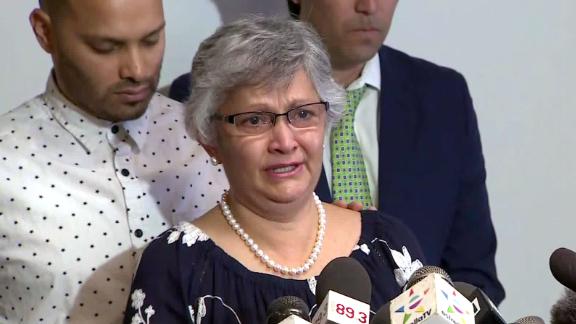 Russell and Paola French, the parents of a man who was shot and killed by an off-duty officer in a California Costco in June, spoke publicly about the incident for the first time at a press conference.

The parents of a man who was shot and killed by an off-duty officer in a California Costco in June said they want video of the shooting released.

Russell and Paola French, who also were struck by the gunfire and were recently released from the hospital after several surgeries, spoke publicly about the incident for the first time Monday.

They said they have filed a claim with the city of Los Angeles and want investigators to release surveillance video of the deadly encounter inside a Costco in Corona.

The family was getting groceries for Father's Day

The couple and their oldest son, Kenneth French, were shot while shopping for groceries in preparation for Father's Day on June 14, Paola French said.

Kenneth French, 32, was nonverbal and had been diagnosed with schizophrenia, his family said.

As they stood around a sample table, Kenneth French struck off-duty police officer Salvador Sanchez as he was holding his young child, the family's attorney Dale Galipo, told reporters at a news conference Monday.

The strike has been described as a push or shove by some and a punch by others, Galipo said.

Galipo says some witnesses indicated the officer fell to the ground, but he says no one reported that he lost consciousness. In fact, he said, multiple witnesses -- including Russell and Paola French -- said Sanchez handed the child to his wife, identified himself as a police officer, and pulled his service weapon.

CNN has reached out to an attorney for Sanchez and has not yet heard back.

"This wasn't a little push -- this was a severe assault," said Ira Salzman, an attorney for Sanchez, according to the Los Angeles Times Monday. "My client suffered a concussion."

The attorney also said the officer was acting to protect his young son.

"It's just a terrible tragedy that we have two sets of well-meaning, good parents who were trying to help their children," the LA Times quoted the attorney as saying. "My client acted in self-defense and this was a sad, tragic result, but he did not commit any crime, nor did he do anything to merit an award of civil damage."

'I was pleading for our son and our lives,' mother says

"After hearing officer Sanchez identify himself as a police officer I begged and told him not to shoot," Russell French said of the deadly encounter. "I said, 'We have no guns and my son is sick.' He still shot."

Paola French also says she pleaded with the officer. "I told Officer Sanchez not to shoot twice. I even said please," she recalled between sobs. "I was pleading for our son and our lives. I was still shot in the back. What threat did I pose to him?"

Kenneth French was shot at least twice in the back and another shot was fired that struck his shoulder, Galipo said.

He died of internal bleeding, according to Galipo.

Russell French was shot in the abdomen. He said his pancreas was grazed and he was released from the hospital about a week ago after telling doctors he needed to go home to bury his son.

Paola French was shot in the back and has already undergone seven surgeries and has several more scheduled to deal with the complications from her injuries, Galipo explained.

"The physical injuries and trauma has been extremely painful to endure," Paola French said. "Not only did we lose our first born son Kenneth, my husband and I have sustained injuries that will impact our lives forever."

The family filed a claim against the city of Los Angeles Monday, Galipo said. The city has 45 days to respond. Once the city has responded to the claim, the family will decide whether to pursue a lawsuit, Galipo said.

CNN has reached out to the city of Los Angeles for a response to the claim but has not yet heard back.

Galipo said the family is targeting the city because Sanchez was trained by its police department, was using a weapon issued by that department, and was acting in his capacity as an officer when he announced himself as one. Galipo said that if Sanchez says he was responding to the situation based on training he received from the department, the training being taught needs to change.

"A push or a shove or even a punch does not justify the use of deadly force, particularly for a trained LAPD officer who should know better and should de-escalate the situation," Galipo said. "Especially when you're told someone is sick or has a mental illness, especially when you're in Costco and there's innocent customers and children."

No charges have been filed in the case. Sanchez was placed on administrative leave in June following the shooting.

The Riverside District Attorney's Office is investigating the case, according to a statement on the Corona Police Department's website, which says the department finished its own investigation at the end of June and handed the case to the DA.

But the family is calling for the release of that video.

"I just can't understand how someone could walk into a Costco, kill my brother, shoot both my parents, shoot my mom in her back and then be able to go home that same night and sleep on their pillow while we're here struggling," said Kevin French, Kenneth's younger brother.

He says that he thinks the video should be released as many people have already seen it. "If the officer is allowed to see the video, why can't my family or I or the public see the video?" Kevin French asked.

The LAPD said in June it was conducting an administrative review of the deadly shooting. The department told CNN Monday night that it does not have any statement in response to the claims made at the news conference or any update on the case to share.

Kevin French is also upset about the lack of contact from the police department following the shooting of his entire family. "I only found out about the shooting and the murder of my brother like the rest of the public the next day on June 15," he said. "Instead of celebrating Father's Day like we had planned with the whole family, I was now stuck making the most crucial and difficult decisions I've ever been faced with in the ICU for the survival of my parents."

Father: 'We have to bury him. We need the closure.'

Now the family is preparing to bury their beloved son and brother Friday, more than two months after his death.

"He's been in the morgue for over two months," Russell French said. "I don't even know how his face is going to look like when we meet him on Friday and that is going to be another shocker to us but we have to bury him. We need the closure."

Paola French, through tears, described her firstborn son as a gifted, exceptional student and a star athlete who loved sports.

She said he was gentle, caring, close with his family and had never been aggressive. "Not in our wildest dreams did we expect that our son Kenneth would be taken away from us that night," she said. "On top of the total shock, a piece of our hearts is missing and our lives will never be the same."

As he helps plan his brother's funeral and manage his parents' new medical issues, Kevin French said his main concern is that no one else has to suffer what his family has gone through.

"I would never want anyone to go through this pain but the sad truth is it could happen to anyone," French said. "It could happen to you, your brother, your sister, your parents, all at a Costco, too."