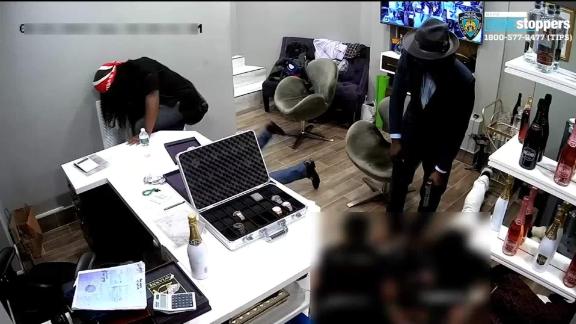 Three men entered a jewelry store posing as customers, then robbed it at gun point

Police are looking for three men suspected in a bold, daylight robbery at a New York jewelry store popular with rappers and other celebrities.

The thieves forced four employees at Avianne & Co. Jewelers into a back room on Sunday at about noon and then tied them up with zip ties and duct tape, according to the New York Police Department.

Closed-circuit video showed that at least two of the men were holding handguns as the employees lay on the floor.

Police said the men pretended to be customers before ransacking the store.

The men's faces are clearly visible in photos and video released by NYPD Crime Stoppers and there is a $2,500 reward for information leading to their arrest

No one was hurt in the robbery, police said.

Police have not said how much was stolen, but CNN affiliate WCBS reported that the men left with duffel bags full of jewelry.

Avianne & Co. Jewelers describes itself as "the leading Custom Diamond Jewelers in Hip Hop and Pop Culture," on its Facebook page and says it's the exclusive jeweler for rappers Nicki Minaj, Lil Wayne, Cam'ron and others.

The store has a huge following on social media and its Instagram account features photos and videos of the elaborate, diamond-encrusted rings, watches, chains and pendants its jewelers have made for their famous clients.