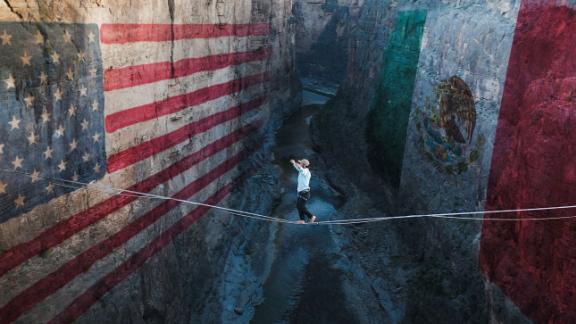 In a new documentary by Kylor Melton, slackliners from the US and Mexico walk 500 feet above the US-Mexico border to make a political point.

As politicians on Capitol Hill clashed over immigration, Corbin Kunst had a different struggle ahead of him: successfully crossing the Mexico-US border hundreds of feet in the air.

The government had been shut down for a historic 35 days, in a standoff about funding for President Trump's border wall. On January 25, the last day of the shutdown, Kunst walked a rope suspended high above the border between Mexico and the United States -- about 300 feet long and 500 feet high.

The 27-year-old, along with a team from Mexico and another from the US, traveled down the Rio Grande to Big Bend National Park and the Mexican Parque Nacional Cañon de Santa Elena.

Jamie Maruffo walked the highline between the two countries for the Mexico team, while Kunst, a highlinger of about five years, represented the US team. "We wanted to keep it simple and keep that balance," Kunst said.

It was an act of solidarity to show that people can come together even when political differences tear us apart.

And soon the world will be able to see how this symbolic mission came together in a film called "The Imaginary Line" debuting this weekend.

"Our story, we want to use it to show people that we need to be looking at our immigration issues from an environmental but also humanitarian standpoint," Kunst said. "We do not benefit when we isolate ourselves."

An attempt to change the political conversation

Kylor Melton remembers when Kunst called him with his idea to rig a slackline between the two neighboring countries. It was the early days of what would later become America's longest government shutdown.

"Corbin hit me up and said he had this idea some time in the next couple of years," said Melton, a 27-year-old filmmaker. "I paused for like 20 seconds. My mind was churning, mind racing. And I said, dude, be at my house tomorrow and we can make this thing happen."

Flash forward to August, and the debate around the US southern border has only intensified.

A gunman who police say killed 22 people at a Walmart in El Paso, Texas, said he was targeting Mexicans, according to an affidavit. Some US citizens have started carrying their passports for fear of being deported. The Trump administration recently introduced a rule that could dramatically cut legal immigration, and another that will allow longer detentions of migrant families.

"It's like every day we get news like that," he said. "We want this to stand for something positive."

Against this backdrop, Melton plans to debut the 11-minute project on his YouTube channel Sunday morning, and will also host a Q&A on his Instagram.

"My greatest hope for this film is that we can spark a conversation about what it means to be human today," said Melton, who used his own resources to produce the film. "It's using this as a medium to engage with our neighbors next door."

Making 'The Imaginary Line' a reality

With the help of walkie-talkies, the Mexican and American groups, totaling about 10 people Kunst and Melton knew, paddled down the Rio Grande together nearly 20 miles before finding an ideal spot to rig the slackline.

While the strenuous, captivating highline walk is at the heart of the film, the rigging process is just as challenging and takes years of experience and knowledge.

"You're putting your life in each others' hands," said Melton, also a highliner. "It was so beautiful just to be a witness and to be a part of it."

Melton and Kunst, who are both from Oregon, said they checked with lawyers to make sure they did everything legally, from choosing where to rig the slackline's anchors to deciding where both groups could enter the river from their respective sides.

This trip down the Rio wasn't meant to test the legality of what either side could or couldn't do, Kunst said. It was about showing what can happen when people come together for a single initiative.

"We were there to promote cooperation," he said. "We want to have cooperation and trust all over the world, especially with our neighbors."