The Don who would be King 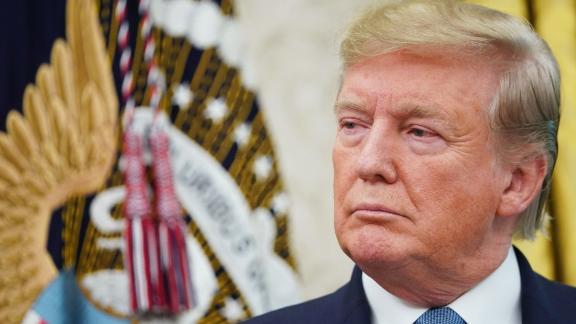 President Trump tweeted that US companies were "hereby ordered to immediately start looking for an alternative to China," despite the fact he has no power to do so.

There are countries that have endured unhinged leaders before. I'm thinking of Britain during the reign of King George III, whose years of delusion were depicted in the 1994 film "The Madness of King George." Our current civic stress test in the United States is coming courtesy of a President whose narcissistic impulses seem to be getting worse. Two recent days crystallized those concerns.

Imagine any other president in our history looking toward the sky and proclaiming himself "the chosen one." That came Wednesday, hours after President Donald Trump retweeted conspiracy theorist Wayne Allyn Root, who stated "the Jewish people in Israel love him ... like he's the King of Israel. They love him like he is the second coming of God... ." Yes, that would be the president of the United States laying claim to the title "King of Israel" and the second coming of God, also known as the Messiah.

There is no universe where the President approving of comparisons of himself to the Messiah is not strange and disturbing.

Then came Friday, when in a morning tweetstorm the President aimed his ire at Federal Reserve Chairman Jerome Powell and the temerity of the Chinese to announce a new round of tariffs in the ongoing trade war. "Our great American companies are hereby ordered to immediately start looking for an alternative to China," he declared. And then the markets tanked.

The problem, of course, is that presidents in free market economies don't have anything resembling the power to "hereby order" American companies to do his bidding. Even the arcane phrasing is monarchical bordering on delusional. But that has been a theme of his grandiose visions -- President Trump seems to see himself as invested with the powers of a king, constrained only by the generosity of his will. Which is why he rails against any individual or institution who attempts to hold him accountable.

This is particularly ironic in light of all of the self-styled constitutional conservatives who baselessly railed against President Barack Obama as a socialist who would be "king." Now they roll over for President Trump, who thinks he's got the power to push companies around like so many pieces on a human-size chess board.

But let's return to Wednesday, because he wasn't done after the "second coming" comment. A few hours later he joked with Medal of Honor recipients that he'd asked his staff whether he could give himself the same award. This isn't just tone-deaf and in bad taste for a man who has basically admitted dodging the draft -- it's self-important to the point of self-parody.

Then again, it was also a day in which Trump doubled down on his accusations that Jewish Democrats are being disloyal, canceled a meeting with the Danish Prime Minister -- whom he proclaimed "nasty" for her refusal to consider selling him Greenland -- and announced that he was exploring an effort to overturn aspects of the 14th Amendment, which established birthright citizenship in the wake of the Civil War.

Isolate any of these comments and they read like they are ripped from the pages of a dark Christopher Buckley satire about an extremely unwell president. But taken together they demand a bit more scrutiny from a citizenry that is becoming accustomed to treating this President as a reality show star.

Keep in mind, this is just the stuff we're hearing him say in public. As anyone who has ever worked in government can tell you, what politicians say in private is usually exponentially worse. And we know that many in the administration treat this President like a malevolent child, ignoring his insane demands and trying to go about their business. As one senior national security official told CNN's Jake Tapper, "Everyone at this point ignores what the President says and just does their job. The American people should take some measure of confidence in that."

But everything about this situation should inspire the opposite of confidence. We are almost daily being offered a portrait of a President who is routinely untethered from reality. The fact that he offered up 11 lies in that open-air news conference is almost unremarkable in the Trump era.

His supporters in Congress and the partisan press will be held accountable for this in the future. They will have to own it. Deflecting to Democrats' problems or meme-ing their way to sleepy-eyed cynicism is not remotely sufficient. Their alleged conservative values are being violated every day. And, for many, their sense of responsibility will be heavier in the future because they know the truth about the President's erratic behavior but are afraid to say it out loud.

While it is impossible to imagine any past president offering up the delusional statements that Trump uttered Wednesday on the White House lawn, it is easy to imagine Fox News devoting days -- if not weeks -- of hyperventilating coverage if President Barack Obama had pronounced himself "the chosen one" or joked about awarding himself the Medal of Honor. Instead, we heard crickets. The evangelical community is likewise silent about statements that could easily be seen as sacrilegious.

This is not about diagnosing the President's mental health. And it is not a call to invoke the 25th Amendment, because it is designed to deal with complete incapacity and therefore does not apply to our current predicament.

But it is to say that we should not be lulled into a false sense of normalcy by the spectacle of this President. As Tom Friedman said to Anderson Cooper on Wednesday, this is behavior that would have any CEO removed by their board of directors.

This is not a reality show -- it is our country. While we are becoming a laughingstock in the eyes of the world, we run the risk of amusing ourselves to death in the process.

This commentary has been updated to include the President's remarks on Friday.