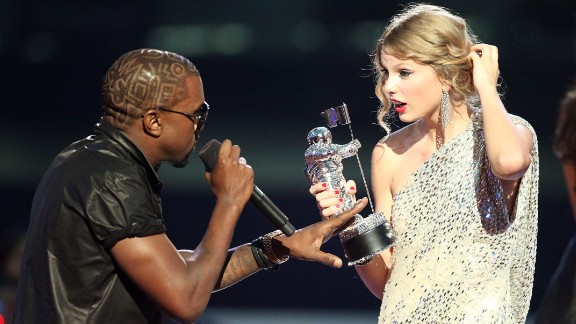 Billboard has published a revealing oral history of what was going on behind the scenes at the infamous 2009 MTV Video Music Awards when Kanye West interrupted Taylor Swift's award acceptance speech.

It's been a decade since Kanye West interrupted Taylor Swift's acceptance speech at the 2009 MTV Video Music Awards, but people are still talking about the incident.

Billboard has published an oral history of what was going on behind the scenes, revealing new details like West's seat being moved to the front row "at the eleventh hour" and Beyoncé's tearful reaction.

Producers say they debated whether cut to Beyoncé's reaction, stay on Swift or kick West out. Backstage, staffers and crew handled all three with only seconds to decide.

Working form a remote truck outside the venue, one producer tells the publication, "There was an awful lot of strange energy in the truck, like, 'Oh my God, get him off! Get him off! What is he doing?' A number of people were really nervous and wanted to get him off the stage, but how do you do that? I wasn't going to send a bunch of people to rugby-tackle him. I turned around in my chair and I said, 'Guys, this is TV gold!'

Following West's stunt, MTV execs found Swift and her mother in tears backstage, with Swift pulling herself together for a live performance in the street minutes later, according to Billboard.

Was it planned? No, they say.

"No, no, MTV would never pull anything like this, because this is potentially hurting artist relations on three of the biggest artists in 2009 right now. They're not going to throw gasoline on this and hope that something explodes," reports Billboard.

But perhaps the most interesting reaction has gone unknown by most of the public for the past ten years. After West got off stage, Pink approached him during a commercial break and got in his face in defense of Swift.

"She was pointing in his face and nodding her head back and forth, and giving him her two cents about how f***ed up this was and then stormed off," one producer told Billboard, adding that after she told him off, the singer was spotted giving West the middle finger.

CNN has reached out to Pink's rep for comment.