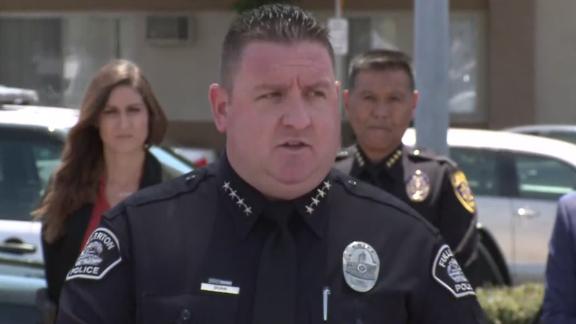 A California State University Fullerton employee was arrested in the death of a co-worker who was found fatally stabbed in his car in a campus parking lot, police said Thursday.

Steven Shek Keung Chan, 57 of Hacienda Heights, was found with multiple stab wounds early Monday, police said. He was pronounced dead at the scene. Chan had retired in 2017 as a budget director from Cal State Fullerton but recently returned to work as a consultant in the international student affairs office, the university said.

"Fullerton police detectives believe based on their investigation that Vo acted alone during the planning and commission of this murder," Dunn said.

He added: "We now know that Vo and Chan were co-workers."

Dunn said authorities are working to understand the motive.

Charges against Vo are expected to be filed Friday, said Kimberly Edds, a spokeswoman for the Orange District Attorney's Office.

The victim was 'a very thoughtful man'

Vo and Chan worked in the same division Treanor said but she didn't know how closely they worked together. She said generally employees do not report to consultants.

"Of all the individuals that I talked to in that division, there didn't seem to be any concerns at all that anybody would ever hurt Steve at all. Not a single person said there were problems," Treanor said. "He wasn't known as a difficult boss. He was known as a very thoughtful man, very by-the book, a man of few words."

She said Chan had an "encyclopedic knowledge of processes, operations, budgets, finance" at the university.

Fullerton police on Tuesday released a sketch and video of a suspect who apparently sought Chan and stabbed him to death, according to the authorities.

The surveillance video showed the suspect running near the crime scene and leaving a parking lot in a black 4-door sedan with black wheels and dark tinted windows believed to be a newer model BMW X6.

Police believe Chan's assailant left a backpack holding an incendiary device and items that could be used for an abduction beneath the car, authorities said. The backpack also had a knife, which was not used in the stabbing, along with zip ties, wigs and other disguise materials, police said.