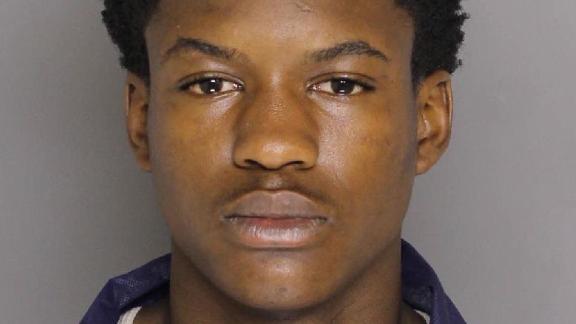 Dawnta Harris, who was convicted of felony murder in the 2018 death of a Baltimore County police officer, was sentenced to life in prison.

The 17-year-old who was convicted of felony murder in the 2018 death of a Baltimore County police officer was sentenced to life in prison Wednesday, his attorney said.

Dawnta Harris admitted to police that he fatally struck Officer Amy Caprio with a Jeep Wrangler in May 2018 when he was 16. The officer was trying to get the teenager to get out of the vehicle.

His attorney, Warren A. Brown, told CNN he had asked for a 30-year sentence for Harris, but the case was "pretty gruesome" and widely publicized.

"The judge was under a lot of scrutiny," Brown told CNN.

Brown said he thinks the judge was fair because the guidelines for felony murder call for a life sentence.

Caprio was investigating a report of a possible burglary when she asked Harris to get out of the Jeep. The driver instead ran her over, police said after Harris was arrested.

Harris admitted to police that he was waiting in the driver's seat of the Jeep as associates were committing a burglary, according to court documents.

"I'm saddened and heartbroken about what happened," the statement said, according to WBAL. "I didn't mean to hurt her. I just wanted to go home. It was a serious accident. I'm seeking forgiveness a second chance."

Caprio's husband said she was selfless and the best person he knew, according to WBAL.

"There's no winners in this case," Tim Caprio said. "I think everybody has been affected in some way, probably most negative."