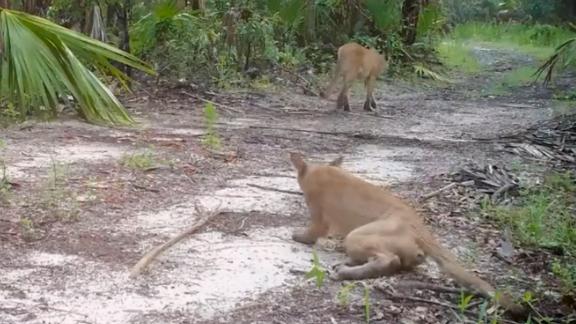 There have been two confirmed cases of neurological damage in a panther and bobcat in Florida, according to the Florida Fish and Wildlife Conservation Commission (FWC).

There have been two confirmed cases of neurological damage in a panther and bobcat in Florida as of this month, according to the Florida Fish and Wildlife Conservation Commission (FWC).

The agency is investigating the cause of the disorder in the animals that is impacting their ability to walk. In trail camera footage, the animals can be seen stumbling and falling down almost unable to use their back legs.

In total, the FWC said they have seen eight panthers (mostly kittens) and one adult bobcat in various degrees of this condition.

"While the number of animals exhibiting these symptoms is relatively few, we are increasing monitoring efforts to determine the full scope of the issue." said Gil McRae, director of the FWC's Fish and Wildlife Research Institute, in a statement on Monday.

Florida panthers and bobcats are the only two wild cat species found in the state. There are only 120 to 230 adult panthers in the population, and they are listed on the Endangered Species Act. Determining the cause of the disorder can help officials minimize the impact it will have on the panther's population

The areas impacted seem to be localized to only three general areas; Collier, Lee and Sarasota counties, according to the FWC. One panther was photographed that could be affected in Charlotte County.

At this time the FWC isn't sure what is causing the disorder but is actively testing for various potential toxins, including rat pesticides, as well as infectious diseases and nutritional deficiencies.

"Numerous diseases and possible causes have been ruled out; a definitive cause has not yet been determined," said McRae. "We're working with the US Fish and Wildlife Service and a wide array of experts from around the world to determine what is causing this condition."

FWC is asking for the public's help to submit any trail camera footage or other videos that might have captured these sick animals by going online to MyFWC.com/PantherSightings.