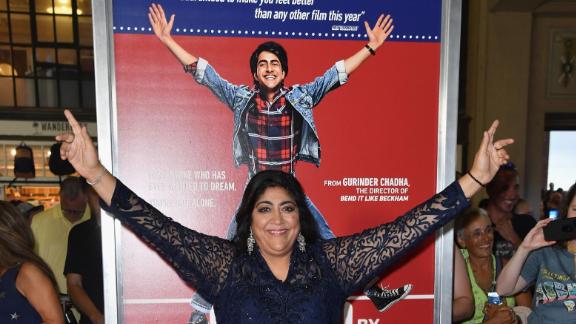 'Blinded By The Light' director Gurinder Chadha ('Bend It Like Beckham') and author Sarfraz Manzoor recall their fateful encounter with Bruce Springsteen.

Anyone who has sung along to a Bruce Springsteen song will find a lot to like in "Blinded by the Light." But director/co-writer Gurinder Chadha ("Bend It Like Beckham") has much more on her mind in this uplifting tale, which offers a timeless and resonant look at the immigrant experience through the filter of the UK in the 1980s.

Inspired by a true story, the film focuses on Javed (Viveik Kalra, in a remarkable performance by a young actor essentially plucked from drama school), the 16-year-old son of Pakistani immigrants chafing under the control of his domineering father (Kulvinder Ghir). Fond of writing poetry, Javed's whole existence is turned upside down when he's introduced to Springsteen's music, as the lyrics pour out of his head and into his soul as they unfurl across the screen.

"It's like Bruce knows everything I've ever felt," Javed marvels, popping a cassette into his portable player, which brands the year "1987" on the movie about as well as anything can.

In most respects, Javed's is a classic tale of a youth chafing against the traditions of his family. But "Blinded" manages to zero in on a particular moment in British history -- as unemployment soared and white nationalism flourished, leading to racial epithets and scrawled "Go home" graffiti directed at the Pakistani community -- while evoking uncomfortable thoughts about what's transpiring today, in America as well as Europe.

Based on a memoir by Sarfraz Manzoor, who shares script credit with Chadha and Paul Mayeda Berges, the project has a great deal in common with "Beckham" in the cultural issues it explores, and using a high-profile figure to illuminate the longing of a teen rebelling against what's expected of him.

At times, it does seem as if the writers have strung together a roster of coming-of-age movie clichés, including the caring teacher (Hayley Atwell) who recognizes Javed's talent, prods him to write and champions his cause. But at the occasional moment when the movie begins to feel clunky, it suddenly explodes into buoyant, infectious renditions of Springsteen hits like "Thunder Road" and "Born to Run" -- not as a jukebox musical, exactly, but in flights of fancy that blur into Javed's fertile imagination.

The key, ultimately, is that Springsteen's music triggers an awakening, one that emboldens Javed to defy his father's edicts, brave speaking to a girl he likes (Nell Williams) and contemplate who he truly is. Yet the movie also has considerable compassion for its supporting characters and incorporates nifty touches involving peripheral ones, such as an unassuming neighbor who takes an interest in Javed's work.

Other than the Springsteen connection (and the Boss blessed the effort by granting the producers extensive use of his songs), everything about the movie has a small-boned, independent sensibility, the kind that often struggles to lure people out to the theater. On the plus side, another film that combines music and nostalgia, "Yesterday," has been one of the, well, unsung heroes of the summer.

Whether it's on a large screen now or a small one later, "Blinded by the Light" represents such a sweet, easy-to-relate-to story that it deserves to be seen, at the least, by anyone who has shown a little faith that there's magic in the arts -- either in music, or a darkened theater.

"Blinded by the Light" premieres Aug. 16 in the US. It's rated PG-13 and is being released by Warner Bros., like CNN, a unit of WarnerMedia.