Mohamed Salah is 'happy at Liverpool'; less so with the Egyptian FA 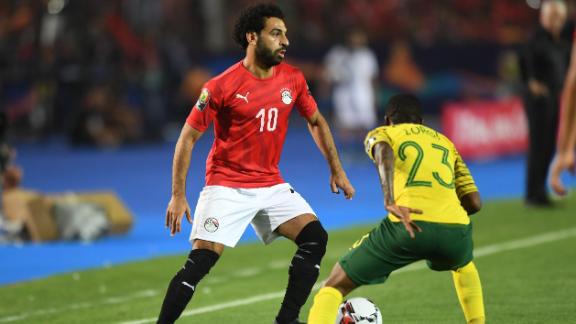 Liverpool and Egypt forward Mohamed Salah tells Becky Anderson about the difficulties the Egypt team has with their FA, including at the AFCON.

Mohamed Salah could scarcely be happier.

A Champions League winner with Liverpool, a Premier League and international superstar and a hero to millions across the world, Salah's popularity continues to soar. So much so that this year he was one of six TIME 100 cover stars, the magazine's annual list of the world's most influential people.

"I'm happy at Liverpool," Salah told CNN's Becky Anderson in an exclusive interview. "I'm happy in the city -- I love the fans and they love me. I'm happy at the club."

And yet, for all the success, there is still one snag nagging him -- his relationship with the national football association of his beloved Egypt.

Such has been the tempestuous nature of the relationship that there had even been reports last year that Salah was ready to give up playing for his country following a series of rows with the Egyptian Football Association.

Though hugely critical of the EFA and its perceived failings, the 27-year-old Salah says the opportunity to inspire future generations to play for their country remains at the heart of his ambition.

"I love this country from my heart," Salah said of Egypt. "It's always in my mind. Something pushed me forward to perform, to be iconic for the kids, to be like a dream for the kids to one day be like me.

"I want to be that person, so to just retire from the national team is huge for me."

After winning the Champions League with Liverpool, Salah turned his attention to playing for the national team at the recent Africa Cup of Nations in Egypt.

According to Salah, what transpired at AFCON left him hugely frustrated at the politicking that is going on.

He accused the EFA of being in "competition" with him, hitting out at the lack of security afforded to players at the team hotel, while claiming grievances taken to the governing body were ignored.

Ahmed Shobair, the deputy head of the EFA, denied the accusations, insisting the players and the hotel was isolated from the public.

"These are the same accusations we heard from him (Salah) during the World Cup," Shobair told CNN.

"Compared to the alleged mistakes of the World Cup, the African Cup of Nations' training camp was extremely disciplined," he added.

Shobair and the rest of the EFA board members resigned in July in response to public anger for Egypt's performance in the African Cup.

"I think with the federation, it was a bit like a competition," Salah told CNN.

Egypt, which hosted the 2019 tournament, had been expected to challenge for the title but was shocked by South Africa in the last 16, leading to EFA President Hany Abo Rida resigning from his position and coach Javier Aguirre losing his job.

Salah, who has endured a frosty relationship with the EFA over the past few years -- largely stemming over an image rights dispute and his criticism of the team's league's preparations for the 2018 World Cup in Russia -- was particularly critical of the EFA's failure to protect players from the general public in the team hotel during the recent tournament

And, during the recent AFCON tournament in Egypt, Salah said the ease with which people gained access to the team's hotel was "not normal."

"When we had one day off, I couldn't go down from the room until 9:30 p.m.," Salah said of the recent experience at AFCON.

"I complain because I'm a human being. I want to be with the players. I want to sit down and enjoy my life. We are a team, we love each other, as players we want to play something.

"So, when I'm trying to say something, I'm saying for me and behalf of the players, because the players sometime talk to me, 'Please, if you can do that.'

"But for them it's a competition."

READ: 'Mohamed Salah? He's like the Sphinx and the Pyramids'

This is not the first time Salah has been critical of the Egyptian FA.

Salah's row with the EFA over image rights was reignited last August after the national association used his image to promote the team's official sponsor WE at a time the player had a sponsorship deal with Vodafone.

The player also hit out at the association over its preparations for the World Cup in Russia, with his lawyer claiming that Salah had been woken between 2 a.m. and 4 a.m. by autograph hunters knocking on his hotel door.

Salah was also unhappy at the national association after being photographed with Ramzan Kadyrov, the Chechen leader, while preparing for the World Cup in Russia.

Salah was brought onto the field by Kadyrov, and warmly pictured while making him an honorary citizen.

Kadyrov has been widely criticized for human rights abuses, including the persecution and detainment of those in the LGBTQ community.

He denies the allegations but has made controversial statements that have more than raised eyebrows.

"Salah feels exposed by what has happened in Chechnya, a source told CNN in June last year. The Liverpool star doesn't wish to engage in topics beyond football or to be used for anyone's political image."

It led to speculation that he might quit the national team, though that never materialized

Though critical of the EFA, Salah accepts that the players, too, have to take some responsibility for the team's failure at AFCON.

He believes the pressure of being the host nation and fans' expectations proved difficult to cope with.

While Salah remains committed to the Egyptian national team, he wants to see changes when a new president of the EFA is eventually appointed.

"The one who is coming now needs to be honest with himself and try to fix the thing because as a player in the national team, they're not happy about a lot of things," he added.

"Hopefully the new one comes and does things differently."