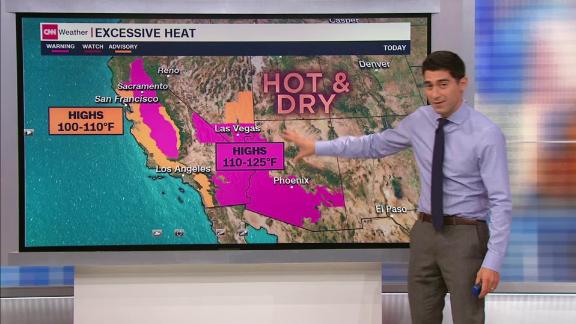 Over 25 million people are under dangerous heat alerts as temperatures approach record levels in California and the desert Southwest. The heat will then spread east into the weekend.

If your computer is running Windows 10, do an update immediately. Microsoft says that version has vulnerabilities that could be "wormable."

Jeffrey Epstein had "multiple breaks in his neck bones," according to an autopsy performed on the multimillionaire hedge fund manager. People familiar with the autopsy report told the Washington Post the bones broken in Epstein's neck included the hyoid bone, which is near the Adam's apple. This sort of break can happen when a person hangs themselves or dies by strangulation, forensics experts told the Post. The autopsy raises even more questions about how Epstein died. He was found dead over the weekend in his cell in a New York jail. He'd been jailed since last month, awaiting trial on sex trafficking charges.

Looks like those warning lights on the economy will keep flashing red today. Asian markets stumbled this morning, after Wall Street suffered its worst day of the year. The Dow tumbled 800 points yesterday after the bond market showed -- for the first time in more than a decade -- an inverted yield curve. What's that, you ask? You can read the particulars about it here, but just know that it's bad news. It has preceded every recession in modern history. Add to that the uncertainties brought on by the trade war with China and evidence of economic slowdowns in other countries, and this Wall Street freak-out becomes more understandable.

A suspect was taken into custody last night, ending an eight-hour shooting standoff in north Philadelphia that left six police officers wounded. It all started when police went to a row house with a narcotics warrant. Some of the officers were in the kitchen of the house when the shooter began firing and police shot back. The gunman continued firing intermittently at police -- sometimes shooting out of a window -- during the standoff. Some of the officers escaped, but others were trapped in the home with the shooter. They were later rescued by a SWAT team. The wounded officers had non-life threatening injuries and have all been released from the hospital.

More than 400 lawsuits were filed in New York yesterday as part of a new child sex abuse law in the state. The New York Child Victims Act lets adult survivors of child sexual abuse sue an abuser or a negligent institution, no matter how long ago the abuse took place. The law instituted a one-year period for the filing of lawsuits, which began yesterday. A state court official said so many lawsuits are expected that 45 judges have been set aside to deal with the cases.

China has sent large numbers of paramilitary forces close to the border with Hong Kong. CNN teams in the mainland Chinese city of Shenzhen saw uniformed members of the People's Armed Police Force with riot shields and batons, as well as numerous semi-militarized vehicles, stationed at the city's Bay Sports Center yesterday. Many believe the move is intended to send a message to protesters in Hong Kong. The People's Armed Police Force is the 1.5 million-member paramilitary force the government regularly deploys to quell protests within its borders.

Phoenix was taken off life support at 8 months old and not expected to survive. Now she's about to celebrate her first birthday.

Someday my prince will come

Ex-One Direction singer Harry Styles apparently turned down the role of Prince Eric in the live-action "Little Mermaid," and his fans aren't taking it well at all.

Congrats to Ashley Graham. The model and her husband took to Instagram to announce she's pregnant with her first child.

Can the word "the" be trademarked? Guess we're about to find out because "The" Ohio State University has filed an application to trademark the article.

What if we went back through all the family trees and just pulled those people out that were products of rape and incest? Would there be any population of the world left if we did that?

GOP Rep. Steve King of Iowa, defending not allowing exceptions for abortion in cases of rape or incest. Both Democrats and Republicans condemned his bizarre remarks, with many calling for his resignation

John Hickenlooper is expected to drop out of the 2020 presidential race today. The former Colorado governor, a moderate voice in a left-leaning Democratic field, could run for the Senate.

Who's the better cook, mom or dad? Let their kids decide! (Click to view)