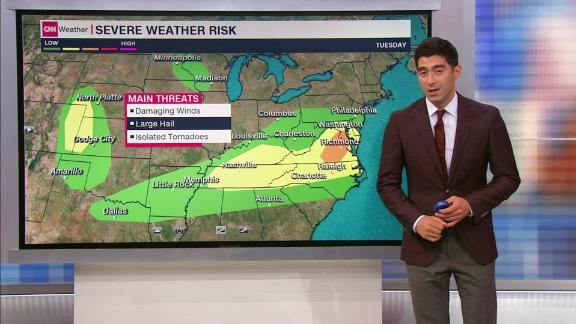 Over 70 million people are under the threat for severe storms from Texas to New Jersey this afternoon. Also, today marks the 7th day in a row that some areas have been under dangerous heat alerts in the South.

Watch out below: The Dow sank nearly 400 points yesterday because of those lingering trade war fears. Will it be another roller-coaster day for the markets?

The Trump administration released a new regulation yesterday that could make it more difficult for immigrants to enter the US legally. The rule allows green card and visa applicants to be turned down if they have low incomes or little education and have used benefits such as most forms of Medicaid, food stamps and housing vouchers. Acting US Citizenship and Immigration Services Director Ken Cuccinelli says the new regulations encourage "self-reliance and self-sufficiency for those seeking to come to or stay in the United States." Critics say the rule just puts a choke hold on legal immigration for no reason. "If you're an immigrant, he believes you have no place in this country," 2020 Democratic hopeful Beto O'Rourke tweeted about President Trump following the announcement. Immigrant advocates said the rule would also penalize hard-working immigrants who may need a small amount of government assistance to start out. New York's attorney general has already said she plans to sue to block the rule.

A friend who provided the Dayton, Ohio, shooter with ammunition and tactical gear is facing federal firearms charges. Ethan Kollie, 24, of Kettering, Ohio, admitted to the FBI that he'd purchased body armor, a 100-round double drum magazine and an upper receiver for an AR-15 for Connor Betts, who went on to kill nine people this month in a Dayton entertainment district. Kollie also said in an interview that he had done hard drugs, marijuana and LSD with Betts several times a week between 2014 and 2015. The local US attorney made it clear that although all the items Kollie bought for Betts were used in the shooting, Kollie didn't know of the attack beforehand and did not intentionally help plan it.

The questions surrounding Jeffrey Epstein's death have uncovered what employees say is a broader problem of short staffing and budget constraints in federal prisons. Attorney General William Barr said "serious irregularities" were found at the Metropolitan Correctional Center in New York, long thought to be a well-run facility that has been used to house high-profile prisoners who require highly secure conditions. However, employees at the prison gave accounts of 18-hour workdays, mandatory overtime and prison guard shifts being covered by workers who aren't prison guards. In the case of Epstein, a person familiar with the matter said at least one of the two employees on duty at the time of his suicide was not part of the regular detention workforce.

A bit of good news amid the ongoing Ebola crisis in the Congo: Scientists say they are one step closer to curing the deadly disease, and two new treatments are proving so effective, they're being offered to all patients there. The Congo is experiencing the second-deadliest Ebola outbreak ever, with 1,800 succumbing to the virus since last summer. The extremely infectious hemorrhagic virus has a high mortality rate, but scientists said the two drugs that tested the best lowered the rate significantly, especially among patients who were treated early. "From now on, we will no longer say that (the Ebola virus) is not curable," the general-director of the DRC's federal medical research institute told reporters in a call. "This advance will, in the future, help save thousands of lives that would have had a fatal outcome in the past."

What was behind a fatal blast that killed five nuclear specialists at a military test site last week in northern Russia? According to the official account, the elite scientists were killed during tests on a liquid propulsion system involving isotopes, but other information seems to deepen the mystery rather than solve it. The incident happened in Sarov, one of Russia's so-called secret cities that's closed off to foreigners and accessible only by permit (think Los Alamos, New Mexico, a birthplace of American nuclear weapons design). Moreover, authorities in northern Russia detected a brief rise in radiation levels in the area following the explosion. Put it all together, and experts believe the test most likely had some nuclear dimension. But given the Russian government's characteristic secrecy, it's not clear how much more we'll learn about the cause -- or the possible effects -- of the blast.

The STRENGTH of this family ...

Confused investors keep buying FORD stock thinking it's Ford Motor Company, but it's not. It's a tiny company that makes medical and electrical devices

Man's false teeth got stuck in his throat during surgery, and no one noticed for 8 days

There has to be a clinically recognized name for the fear of this happening.

And they're gonna steal 'em till they can't no more.

"When a woman in the public eye is extorted, we have to spend time, money and energy dealing with it, hiring lawyers and security experts, and living with a pit in our stomach about when and how we will be humiliated."

Comedian Whitney Cummings, who recently spoke out against attempts to extort her over revealing Instagram story photos she accidentally posted

The proportion of Americans who want there to be a legal path to citizenship for undocumented immigrants, according to the Pew Research Center

What, you think we wouldn't show you that incredible fish cannon? Reminder: This is for the fish's benefit, so don't worry. It's also for your benefit because, well, look at it! (Click here to view.)