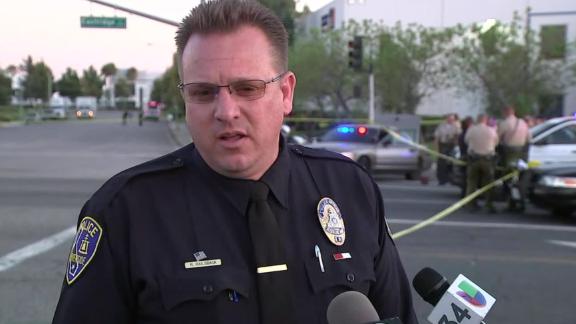 Three officers were injured in a shooting in Riverside, California. The incident began when a California Highway Patrol officer was shot after making a traffic stop, according to Riverside Police spokesman Ryan J. Railsback.

One officer died and two other officers were injured after being shot Monday following a traffic stop in Riverside, California.

The incident began when a California Highway Patrol officer was shot after pulling over a vehicle near I-215 and Eastridge Avenue, according to Riverside Police spokesman Ryan Railsback.

Two responding CHP officers also were shot, according to Railsback.

The suspect was transported to a hospital where they were pronounced dead, Railsback said.

The identity of the suspect has not yet been released.

Railsback says one of the officers was airlifted to a hospital by a local sheriff's department helicopter. The other two officers also were taken to a hospital.

Conditions of the two other officers are unknown at this time.

Law enforcement recovered a fire arm at the scene, but authorities do not know why the suspect fired on officers, according Railsback.

At least one other person, a civilian who was not in the immediate area of the shooting scene, was injured in the shooting but it is not believed they were struck by a bullet, Railsback said.