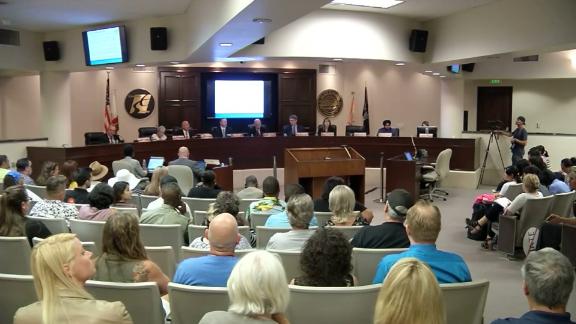 A city council meeting in Modesto, California erupted in laughter after a "straight pride" leader called his organization a "totally peaceful, racist group."

When Don Grundmann took the podium to boos and jeers at a Modesto City Council meeting Wednesday, he appeared angry that some people had called his efforts to organize a "straight pride" event in the California city racist.

He singled out Council member Kristi Ah You, accusing her of "pulling the race card" and allegedly inflaming tensions by "attacking us as racists."

Then he appeared to make a slip of the tongue.

"We haven't done anything," he said. "We're a totally peaceful, racist group."

The crowd erupted in laughter.

As Grundmann tried to regain control of the room, he said his group was "here to defend all races" and claimed that Planned Parenthood was the "greatest mass murderer of blacks in this nation's history."

Shortly after, he was told his time was up and the crowd booed as he left the podium.

Grundmann, who previously ran two failed campaigns for the US Senate, leads a group called the National Straight Pride Coalition. It claims on its website that heterosexuality, the nuclear family and Western civilization, among other institutions, are under attack.

The group is planning a "straight pride" parade in a local park on August 24.

Modesto is home to about 214,000 people, according to the US Census Bureau.

Over more than four hours, almost 30 constituents spoke against the event. A handful spoke in favor of it, citing free speech.

"I'm here to condemn the straight pride event and to unequivocally state that this white supremacist rhetoric is not speech that deserves protection," Mason said at the meeting. "Whenever this rhetoric is given a platform, violence always follows."

CNN has attempted to reach Grundmann but was unable to leave a message because his voice mailbox was full. He has not responded to an email request for comment.

Marjorie Sturdy, vice president of the Modesto Progressive Democrats, also voiced her opposition at the meeting.

Sturdy said that the Modesto Progressive Democrats are teaming up with local community groups to organize an event on the same day as the "straight pride" parade. She said it will include music, speeches and prayer.

"It'll be a colorful, fun, celebration of life," Sturdy said.

On Friday, the city of Modesto denied the application for the straight parade event at the city's Graceada Park, citing two concerns.

First, officials said the required certificate of liability insurance has been voided. The application was also denied based on security concerns at the park. The city suggested planners consider moving the event to another location.

The straight pride event organizers have until Tuesday at 5 p.m. (8 p.m. ET) to secure the liability insurance and agree to hold the event at the alternate venue.