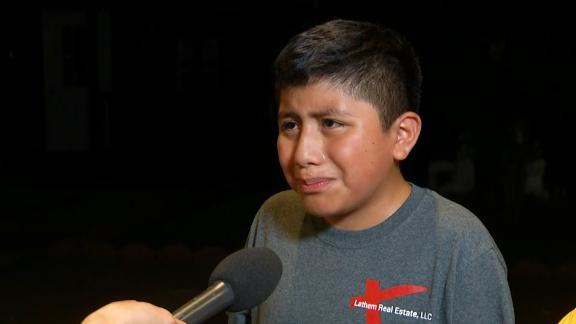 Children are sharing their emotions after their parents were detained during an ICE raid in Mississippi.

Even the youngest children of the undocumented immigrants swept up in workplace immigration raids across Mississippi were suddenly thrust into adulthood. But they're still kids.

Marleny Lopez, 14, said she was consumed by guilt. Her father Fredy was working to save money for her quinceañera, the traditional coming-of-age celebration of a girl's 15th birthday, when he was among the 680 workers immigration authorities picked up Wednesday at Mississippi food processing plants.

Marleny dialed a phone number on a card she had for an immigration hotline. Her mother doesn't speak English well.

"It was the most horrible thing. In my head I was like, if he doesn't get out, it's going to be my fault," she recalled. "I was the only one able to do it."

The people on the immigration hotline weren't helpful, said Marleny, who wears braces and has long dark hair.

"They kept telling me, 'Oh, we don't know where he's at or we don't know if he's detained yet.' The ladies over there were being disrespectful to me. They were asking me, like, 'What's the call for? I was, like, 'I want to know where my dad was at.' And they were like, Ugh. They were, like, disgusted."

Wednesday was the first day of the school. Her father finally arrived home about 2 a.m. She went to bed an hour later.

"Right now, my dad is here," Marleny said, her father standing next to her.

"But other kids at school, in elementary, they told me they don't have their parents at all. They're upset. They're scared. And they're little kids. I'm in high school. Maybe I can understand a little bit more. But elementary (school) kids, they don't know anything. They were like, 'What's going to happen to my parents?'"

Her father's home for now. He wears a GPS-monitoring ankle bracelet and will have a hearing in an immigration court. Still, the future's uncertain.

The Mississippi raids have added to an already heightened sense of anxiety in many US immigrant communities days after a gunman who apparently espoused anti-immigrant views killed 22 people at a Walmart in El Paso, Texas.

"We're not the one shooting people," Marleny said. "We're not killing people."

Fredy Lopez said what started as a normal day at the food processing plant was interrupted with news of an unexplained emergency. Workers were assembled in a large room.

"All the Hispanics come this way and those who are from here go over there," he remembered immigration agents telling the workers. "They didn't ask who had papers or not. The idea was that all Hispanics went to one side."

Lopez was born in Guatemala. He came to the US illegally 17 years ago. He said he always worked and paid taxes. He has five US-born children and, for a while on Wednesday, thought he wouldn't return home to them.

"There were about 20 of us and only three of us came back," he said coworkers detained with him.

'Our children ... are Americans, too'

Randy Garcia, 12, was still teary and nervous one day after his parents were taken away by US immigration authorities. He composed himself to translate for his mother, Eva Lopez.

On Wednesday night, he and his 8-year-old brother, Anderson, were home alone. Randy fed his brother and at some point, his parents called to say they were in custody.

"Son, the immigration has now captured me," he said of the calls. "Don't worry, you're going to be safe. We'll try to find a way to get out. I started praying to God to let them go."

His dad never came home. His mother appeared at the door about 10 p.m. Wednesday. They hugged and cried for a while.

Randy, close to tears, recalled speaking to his father on the phone. He believes his dad said he was detained in Louisiana.

"He said to my mom, 'Take care of the kids because the immigration has now captured me and I might be going back home,'" said Randy, referring to his father's native Guatemala.

Asked if he had a message for his father, Randy said, "I hope you come back, and may God protect you."

Randy and Anderson wept when their mom spoke about being picked up at work and not being able to greet the boys at home after school.

"I don't know why Donald Trump thinks were criminals," said Eva Lopez, who wore black-framed glasses and a rosary around her neck. "We're here to feed our children. We are struggling for our families."

Lopez also wore an ankle bracelet. She will have an immigration court hearing.

Her message for Trump and others who take issue with Hispanic immigrants: "Our children will stay here. They are from here. They are Americans, too ... God is greater than those who do not want us here."

The boys cried next to her.

'I told most of my friends to not be scared'

Astrid Lopez, 16, said his mother was detained by immigration authorities a month and half ago after leaving work in Mississippi. Her mother, Marta Matias, was released about two weeks ago. Matias moved to the US 19 years ago to escape poverty and crime in Guatemala.

Now Astrid is offering advice to children whose parents were detained this week.

"I told most of my friends to not be scared, to have a voice and speak up for themselves," she said.

"My parents are sacrificing their lives to help us get a better life. We didn't come here to injure nobody, unlike other people who are born here and they themselves injure and harm others."

She said of her mother, "Thanks to her, I'm able to get a better education and thanks to her I'm actually a very good student. I make straight A's. And I'm very proud that she's taught me to be a good person and I thank God that she was able to get out."

She said she hopes friends whose parents were taken away this week will soon feel the same way.